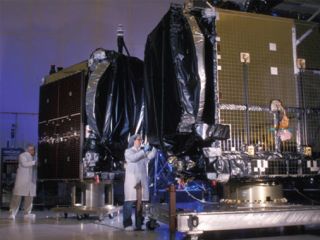 MEASAT-3a is based on Orbital's STAR-2 spacecraft platform.
(Image: © MEASAT.)

WASHINGTON -The scheduled Aug. 21 launch of Malaysia's MEASAT 3a telecommunicationssatellite aboard a Land Launch rocket has been postponed indefinitely after thespacecraft was damaged at the Baikonur Cosmodrome in Kazakhstan, according tothe satellite builder and launch services provider.

MEASAT3a, owned by Measat Satellite Systems, suffered damage after being hit byan overhead crane at a Baikonur processing facility, according to a statementissued Aug. 13 by the satellite's builder, Orbital Sciences Corp. of Dulles,Va. The accident occurred over the weekend, Orbital said.

"Weare working closely with our customer to do all that we can to assess thesituation and recommend a course of action that will put the mission back ontrack in as little time as possible," Christopher Richmond, senior vicepresident and head of Orbital Commercial Communications satellite programs,said in a prepared statement.

LandLaunch operates from Baikonur using a close variant of theRussian-Ukrainian Zenit 3SL rocket that Sea Launch uses to loft satellites froma floating platform near the equator in the Pacific Ocean.

Paula Korn,a spokeswoman for Sea Launch, which markets and handles contractingarrangements for the LandLaunch vehicle, said the accident occurred after the satellite had beenmated with the rocket's Block DM SLB upper stage. She said an investigation ofwhat caused the accident is under way.

A newlaunch date for MEASAT 3a will depend on how long it takes Orbital to assessand repair the damage, Korn said. "It's definitely not going in August - Ican tell you that," she said.