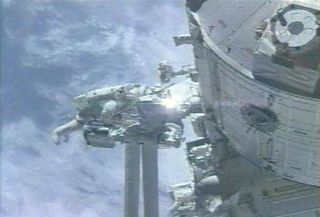 But theseemingly mundane maintenance task gave Garan two grand views of Earth and space from thetip of the station?s 57-foot (17-meter) robotic arm as he toted first theempty 550-pound (249-kg) tank, and then its replacement, from one end of the stationto the other. NASA likened the maneuver to that of a giant windshield wiper.

?A lotdifferent with the planet down there,? Garan said from his perch 80 feet (24meters) above the space station and 215 miles (346 km) above Earth.

?Isn?t it agreat view,? Fossum asked as the station flew high over Peru.

The twoastronauts began their spacewalk at 9:55 a.m. EDT (1355 GMT) just a few minutesbefore dawn over the southern Pacific Ocean just off the coast of Peru. It wasthe third of NASA?s STS-124 mission to deliver Japan?s massive, $1billion Kibo laboratory and a new crewmember to the space station.

In additionto swapping out the nitrogen tank, Fossum and Garan removed insulation coversand restraints from a window and the robotic arm of Japan?s new tour bus-sizedKibo laboratory. They also deployed a set of metal shields between the 37-foot(11 meter) lab and its smallerstorage attic to protect against damage from orbital debris or tiny spacerocks.

Thespacewalkers worked swiftly, starting out more than a half hour early andcompleting all their main tasks plus a few extra chores.

One extratask sent Fossum to the station?s port side solar array rotary joint, a 10-foot(3-meter) wide gear designed to spin the station?s left solar wings like apaddlewheel to track the sun. He collected a sample of some gray dust-likematerial that he first spotted last week in a Thursday spacewalk.

The portsolar array joint is working fine, but engineers on Earth hope that the samplescollect by Fossum will help ongoing efforts to repair a similar gear on thestarboard side that been damaged by metal shavings.

Sunday?sspacewalk marked the 112th excursion dedicated to space station constructionand the last of three spacewalks planned for Discovery?sSTS-124 mission. Fossum and Garan spent a total of 20 hours and 32 minutesworking outside the station during their three spacewalks.

Thespacewalk was the sixth career excursion for Fossum, who ended with a total of42 hours and one minute of spacesuit-clad work. He now ranks 12th on the listof all time spacewalkers. The three STS-124 spacewalks were the first forGaran, who is also making his first spaceflight on the mission.

?Well,there are the stars,? Garan said during one of his robotic arm rides as hepeered out into the depths of space.

Fossum saida young student once asked him if it actually was possible to see the starswhile working on a spacewalk.

?I told himI never had the chance to turn my lights off and look,? he said. ?Indeed, youcan.?