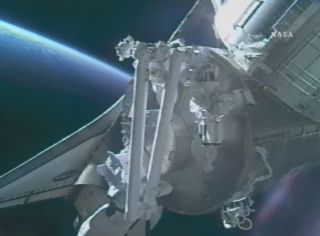 The fading blue limb of the Earth backlights the shuttle Discovery docked at the ISS. At center is the station's six-jointed Japanese robotic arm folded up at the outboard end of the new Kibo lab.
(Image: © NASA TV.)

HOUSTON —Astronauts aboard the International Space Station (ISS) tested a new Japanese roboticarm for the first time Saturday as they passed the halfway mark of theirtwo-week construction flight.

NASA?s spaceshuttle Discovery launchedtoward the station on May 31 to deliver Japan?s $1 billion Kibo sciencelaboratory, a tour bus-sized module that sports its own small airlock, twowindows and a 33-foot (10-meter) robotic arm.

Nyberg andJapanese astronaut Akihiko Hoshide flew the arm through a slight move today toclear space for astronauts to work near it during a Sunday spacewalk.

?It?s a bigmilestone, we have our own house here now,? Hoshide told reporters of Kibotoday. ?And it?s bigger now so people can start doing some science here.?

Fossumspotted what appeared to be excess grease on the gear?s main metal ring duringa Thursdayspacewalk and photographed areas that may contain minor bits of debris,NASA officials said.

?It reallylooks to me like a little bit of grease,? Fossum told reporters today.

Engineershope Fossum can collect samples of the stuff to aid ongoing analysis and repairefforts with a similar gear on the station?s starboard side that has beendamaged by metal grit contamination.