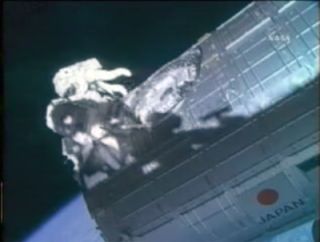 Fossum also took a peek at part of a 10-foot (3-meter) wide gear that rotates the space station's port-side solar arrays like a paddlewheel to track the sun. He reported what appeared to be a build-up of a grease-like material on some surfaces, but found no signs of the type of damage that has hobbled a similar joint on the station's starboard side.

"I do not see any sign of metal shavings or any of the other stuff we have on the other side," Fossum told Mission Control here at NASA's Johnson Space Center. "This is a lot cleaner."

"It looked very similar to what we've seen," she said.

Astronauts discovered metallic grit contamination and damage in the starboard solar array joint last fall, preventing the massive gear from continuously tracking the sun to maximize power production. Fossum tested cleaning methods on the damaged joint during a Tuesday spacewalk and NASA engineers are studying the best methods for a possible repair.

Today's check of the port-side gear was an extra chore aimed at checking whether that joint was still in good health.

Fossum and Garan stepped outside the station at 11:04 a.m. EDT (1504 GMT) and dedicated the bulk of today's 7-hour, 11-minute spacewalk to outfitting Japan's newly opened Kibo laboratory, the largest room ever launched to the space station.

"It's a long ways out here to the end cone," said Fossum as he and Garan hauled themselves across the entire length of the 37-foot (11-meter) Kibo lab. "Whooee! What a view."

With the cameras installed, the spacewalkers moved on to remove bulky insulation covers and restraints from Kibo's six-jointed robotic arm so astronauts can put it through its paces in weekend tests.

"It's like wrestling a cloud," said Fossum, a veteran camper and scoutmaster for the Boy Scouts of America, as they forced the covers into storage bags. "I feel like I'm on a camping trip trying to pack up a wet tent on a Sunday morning."

The spacewalkers also cleared the Kibo lab's rooftop for the arrival of its attic-like storage room, which a previous shuttle crew attached at a temporary perch last March. Shuttle astronauts are slated to use the station's robotic arm to move the storage room to Kibo's roof on Friday.

While Fossum and Garan toiled outside the space station, their crewmates were hard at work inside the new Kibo lab.

Thursday's spacewalk marked the 111th dedicated to space station construction. Fossum ended the excursion with a total of 35 hours and 28 minutes of spacewalking time over five career spacewalks, while Garan ended with 13 hours and 59 minutes in two spacewalks.

Fossum and Garan plan to make one more spacewalk for their 14-day mission on Sunday to replace an empty nitrogen tank on the station's metallic backbone-like main truss. They loosened bolts and retrieved a broken camera today to prepare for that final excursion.