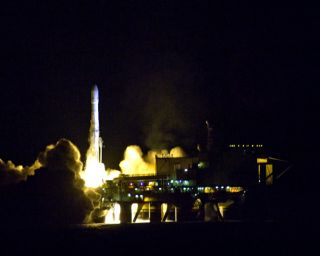 A Sea Launch Zenit-3SL rocket launches the Galaxy 18 communications satellite into orbit on May 21, 2008 from the Odyssey Launch Platform on the Pacific Ocean.
(Image: © Sea Launch.)

The Galaxy 18 satellitebegan its trip to space at 5:43 a.m. EDT (0943 GMT), or around midnight at theequatorial launch site in the middle of the Pacific Ocean.

Propelled off itsocean-going launch platform by 1.6 million pounds of thrust, the Ukrainianbooster pitched east from the launch pad, dropping its first stage andU.S.-built payload fairing within the first four minutes of the flight. Therocket's second stage and Block DM-SL upper stage separated as planned abouteight-and-a-half minutes into the mission.

The Russian upper stagefired its engine twice, first to enter a temporary parking orbit, then to sendGalaxy 18 on a looping trajectory with a high point 22,144 miles (35,637 km). Therocket released the satellite about 61 minutes after liftoff.

A ground station in SouthAfrica received the first signals from the spacecraft a few minutes later,confirming it was healthy after arriving in orbit.

"On time launch, ontime separation, on time acquisition. It was an outstanding mission," saidRob Peckham, president and general manager of Sea Launch Co.

Peckham said the rocket putGalaxy 18 in an accurate orbit with an inclination of zero degrees and altitudenumbers within two miles of pre-launch targets.

"I would like to thankSea Launch for doing a great job with today's mission," said ThierryGuillemin, Intelsat chief technical officer.

Sea Launch did not give theformal go-ahead for the flight until Monday due to an unexplained technicalissue during anotherZenit launch last month. The April Zenit launch delivered an Israelicommunications craft to an orbit just shy of the rocket's objective.

"The (Sea Launch)Chief Systems Engineer reviewed the response to our inquiry and determined thatwe could lift the launch constraint on Galaxy 18," said Paula Korn, SeaLaunch spokesperson.

Korn said she could notcomment further about the issue because the April mission was conducted underthe management of Space International Services Ltd., the Moscow-based firm thatpartnered with Sea Launch to form the Land Launch program.

Galaxy 18 will spend thenext few weeks circularizing its orbit at an altitude of about 22,300 miles(35,888 km). The craft will be stationed along the equator at 123 degrees westlongitude for a mission expected to last more than 15 years.

"Once Galaxy 18completes its in-orbit testing, it will operate in a powerhouse role in the Intelsatfleet, delivering some of the most popular programming to millions of Americanhomes," said David McGlade, Intelsat CEO.

The spacecraft will replaceGalaxy 10R, a satellite that was stricken by problems with its xenon ionpropulsion system in 2004. The eight-year-old craft was originally designed fora lifetime of 15 years, but the propulsion failure forced its owners to order areplacement earlier than planned. PanAmSat Corp. signed the Galaxy 18construction contract with Space Systems/Loral in 2005, a year before PanAmSatmerged with Intelsat.

Equipped with 24 C-band and24 Ku-band transponders, Galaxy 18 will broadcast cable television programmingfor Intelsat's corporate and government customers. Galaxy 18 will also providedata and other communications services, according to Intelsat.

"ESPN, Viacom andShowtime are just a few of the premier customers who anchor the 123 degreeswest location," McGlade said. "That is why our North American Galaxyfleet is unequaled in terms of cable distribution reach and holds anindustry-leading customer base."

"It's a very powerfuland excellent spacecraft for video over North America," Guillemin said."It will be going in the cable arc, so major applications are video, inparticular video distribution. But what this is providing for areas like Alaskais also data (and) voice connectivity. It's everything you can need in terms ofcommunication."

McGlade said Intelsat plansto invest up to $500 million in the company's satellite fleet and groundinfrastructure this year, including the launch of the Galaxy 19 satellite onanother Sea Launch mission this fall.

The Sea Launch Commander controlship and the Odyssey launch platform will sail back to Sea Launch's Californiahome port to begin preparing for the company's next mission in July.