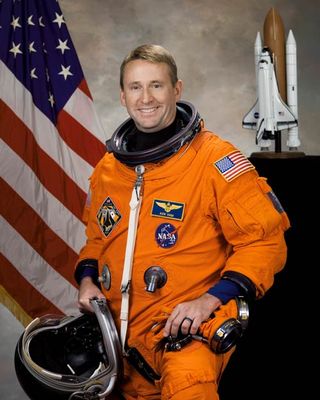 EXPERIENCE: Ken received his commission as anensign in the United States Navy from the United States Naval Academy in May 1987. He was temporarily assigned to the NASA-JSC zero-goffice at Ellington Field, Houston wherehe flew as a crew member on the NASA zero-g research aircraft.

He wasdesignated a Naval Aviator in October 1989 after completing flight training inthe T-34C, T-2C, and TA-4J aircraft at NAS Corpus Christi and NAS Beeville,Texas. Ken reported to NAS Cecil Field, Florida for F/A-18 training andsubsequent operational assignments with the Privateers of VFA-132 and theGunslingers of VFA-105.

Hecompleted two deployments to the Mediterranean Sea including combat missions over North Iraq and Bosnia. During these tours, he served as an air wing strikeleader, F/A-18 demonstration pilot, and night vision goggle instructor. Ken wasselected for the Naval Postgraduate School/Test Pilot School cooperativeprogram where he studied aeronautical engineering for 18 months in Monterey California followed by 12 months of test pilot training at NAS Patuxent River Maryland.

He haslogged over 3,700 flight hours in more than 40 different aircraft and has over300 shipboard, and 300 land based arrested landings.

NASA EXPERIENCE: Selected by NASA in June 1998, hereported for training in August 1998. Astronaut Candidate Training includesorientation briefings and tours, numerous scientific and technical briefings,intensive instruction in Shuttle and International Space Station systems,physiological training and ground school to prepare for T-38 flight training,as well as learning water and wilderness survival techniques. Initiallyassigned as Ascent/Entry, Orbit, and ISS Capcom, Ken is assigned as pilot onthe crew of STS-124. The STS-124 mission to the International Space Stationwill be the second of three flights that will launch components to complete theJapanese "Kibo" laboratory. Launch is targeted for May 2008.