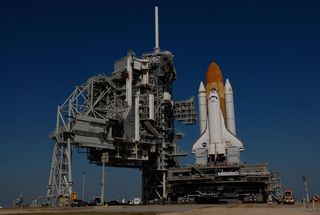 Platforms are extended toward Space Shuttle Atlantis from the fixed service structure, as processing begins for Atlantis' launch to the International Space Station on mission STS-122, targeted for Dec. 6.
(Image: © NASA/Kim Shiflett)

Atlantisand its seven-astronaut crew are poised to launch toward the station with theEuropean Space Agency?s (ESA) Columbus laboratory on Thursday at 4:31 p.m. EST(2131 GMT) to mark NASA?s fourth shuttle flight of the year.

?It?s avery good day for us,? said LeRoy Cain, Atlantis? mission management teamchairman, in an afternoon briefing here at the Kennedy Space Center (KSC). ?Thevehicle is ready, the crew is ready and the flight control team is ready.?

NASA?s slimwindow in which to launch Atlantis and its Columbus cargo to the ISS closes onDec. 13, when the angles between the space station?s power-generating solarwings and the sun become unfavorable to support docked operations. If Atlantis cannotlaunch this month, NASA would likely stand down until Jan. 2, shuttle officialshave said.

?We areextremely excited,? said Alan Thirkettle, the ESA?s space station programmanager, adding that the European astronauts are eager to open Columbus for business. ?We?re looking forward to seeing Columbus being where it belongs.?