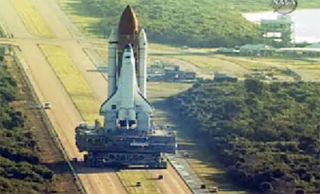 The shuttleAtlantis rolled out to its Florida launch pad Saturday as NASA prepares for aDecember construction flight to the International Space Station (ISS).

But whetherthe space station will be ready for Atlantis?s planned Dec. 6 launch from NASA?sKennedy Space Center in Cape Canaveral, Fla., to deliver the European-builtColumbus laboratory is still uncertain. The station?s Expedition 16 crew is inthe midst of a challengingmonth of spacewalks and construction to prime the ISS for Atlantis?sSTS-122 mission.

?I think itis not outside the realm of possibility, based on discussions we?ve had with theInternational Space Station (ISS) team, that they may be ready for us to launchon Dec. 6,? said Wayne Hale, NASA?s space shuttle program manager, after Wednesday?ssuccessful landing of the Discovery orbiter. ?We?ll see how that plays outover the next couple of weeks.?

On Monday,the astronauts will use the station?s robotic arm to move attach a shuttledocking port to the tip of the outpost?s Harmony connecting module, thedestination for Atlantis?s Columbus lab payload.

Only onceHarmony and its docking port are attached to Destiny and fully activated willthe station be ready to host a visiting space shuttle crew, mission managerssaid.

Atlantis,fresh off a June ISS construction flight, has a slim December window to launchto the station due to the available sunlight for the orbital laboratory?sexpansive solar arrays.

Hale saidthe window, which currently runs form Dec. 6 to Dec. 13, could be stretched oneor two days. If Atlantis cannot launch in December, the shuttle would lift offno earlier than Jan. 2 to avoid flying during the holidays, he added.

Atlantisbegan its slow trek to the launch pad atop a massive NASA crawler-transportervehicle at 4:43 a.m. EST (0943 GMT). The shuttle took about seven hours to makethe three-mile (4.8 kilometer) trip.

Meanwhile,ISS mission managers said they are hopeful that they and the Expedition 16 crewwill have the space station ready in time to meet Atlantis?s December launch window.

?Myunderstanding is that the shuttle program is still working at having theorbiter ready to launch on Dec. 6,? Derek Hassmann, Expedition 16?s lead ISSflight director, said Friday. ?We?re working hard to get there.?