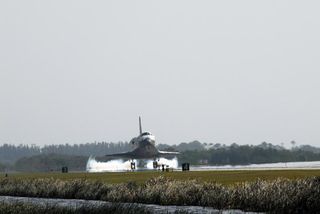 The wheels on Space shuttle Discovery kick up dust on Runway 33 as they touch down at NASA's Kennedy Space Center, concluding the 15-day mission STS-120 to the International Space Station on Nov. 7, 2007.
(Image: © NASA/George Shelton.)

CAPECANAVERAL, Fla. - Space shuttle Discovery and its seven-astronaut crew returnedsafely to Earth today, sailing over the heartland of America after a busyconstruction flight to the International Space Station (ISS).

The 100-tonspaceship touched down on the tarmac at 1:01 p.m. EST (1801 GMT) here at the Kennedy Space Center's Shuttle Landing Facility, shortly after unleashing twochest-thumping sonic booms.

"Wellhello there! It's nice to be back in Florida," shuttle commander PamelaMelroy said as she piloted Discovery to a safe landing. The Rochester, N.Y.-nativemade history during her mission as one of two female commanders in space at thesame time, sharing the limelight with ISS Expedition 16 commander PeggyWhitson.

Anderson spent about five months aboard theISS, and said that his homecoming is going to be a bittersweet affair.

"Theysay all great things have to come to an end, and I'm really sorry I have toagree with that for now," Anderson told mission controllers yesterday."But I had an awesome ride with several awesome crews and I'm very excitedto come on home."

Discoveryracked up 6.2 million miles (10 million kilometers) during its 16-day journeythat began on Oct. 23. The spaceship orbited the Earth 238 times, most of whichwhile docked at the ISS for about 11 days.

"Whatwe demonstrated this flight, I think, is the real value of having humans inspace," said Wayne Hale, NASA's space shuttle program manager. Hale wentso far as to call the effort "one of most complex EVA repairs in thehistory of the agency."

Theunprecedented repair job sent Parazynski, a veteran spacewalker, to a far endof the space station, dangling on the end of a shaky robotic arm. WhileWheelock looked on, Parazynski stitched up tears in the component with"cuff links" made by astronauts on board the ISS.

Melroy saidshe was more than a little concerned about Parazynski's close approach to theelectrified blanket.

"Youmay have heard me … kind of squeak out 'be careful!' as I saw the solararray coming towards him," Melroy said. As Parazynski went to work,however, the commander explained she became comfortable with the riskyoperation.

Yet beforeDiscovery's crew mended the damaged solar wing, they attached the Italian-made Harmonymodule to the space station. The nearly 16-ton room added more than 2,500cubic feet (71 cubic meters) of space to the orbital laboratory and will serveas a vital hub for future expansion.

Astronautsalso relocated a 35,000-pound (15,875-kilogram) component known as the Port 6(P6) truss from atop the space station to a permanent home on the end of theISS.

Yet even asNASA celebrates the Discovery and its crew's success, abusy month awaits the three-person Expedition 16 crew still in space.

Spaceshuttle Atlantis is set to ferry another massive room called Columbus to thestation next month, but spaceflyers Whitson, Tani and cosmonaut YuriMalenchenko will need to relocate and outfit Harmony before the arrival of theEuropean laboratory.

Two otherimmense payloads are also set to arrive at the space station by May 2008.Further adding to mission managers' concerns is a grit-coveredgear that rotates the station's starboard solar wings to help maximizepower output. Without enough power, the space station may not be able tosupport future laboratory modules.

PeteHasbrook, increment manager for Expedition 16, said fixing thesolar-array-orienting device is quickly becoming a major priority for theagency, as it has international partners to appease. Any repair efforts wouldlikely occur after the December shuttle flight, he added.

"Westill … don't know the source of this debris, the grit," saidHasbrook. "There's a lot of discussion about what's our best bang for thebuck," he said of several cleanup ideas in the works.

Until thedevice is restored, space station program manager Mike Suffredini said thedevice will only be moved occasionally, cutting into the orbital laboratory'soverall power output. But the exact impact of the device to ISS powermanagement is still being reviewed, he added.

Today'ssuccessful landing ended Discovery's 34th spaceflight, which is the 23rdshuttle mission to the space station and the 120th orbiter flight in NASAhistory. It also marked NASA's third of four shuttle flights planned for thisyear.

If thespace agency can squeeze in the launch of Atlantis in December, followed closelyby STS-123 in February 2008, Discovery will return to the launch pad again inlate April 2008.

But as forher crew's eventful mission, Melroy said before her flight that she considersit every astronaut's dream.

"Ithas been a dream, it really [has]," she told SPACE.com fromDiscovery's flight deck yesterday. "But it always is when you go tospace."

NASAplans to launch at least 10 more shuttle flights to the ISS - with the possibilityof two more - to complete construction of the orbital laboratory by September2010, when the agency is set to retire its three-orbiter fleet. Anon-space-station construction flight to upgrade the Hubble Space Telescope isslated to fly next year.