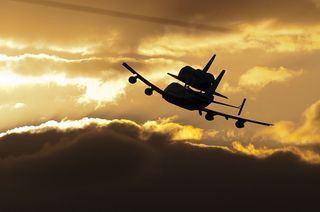 Space shuttle Discovery, mounted atop NASA's Shuttle Carrier Aircraft, flies into the sunrise above Kennedy Space Center in Florida on April 17, 2012. The ferry flight, destined for Washington, D.C., marked the final departure for Discovery from its home for three decades.
(Image: © collectSPACE/Ben Cooper)

WASHINGTON — Space shuttle Discovery, NASA's fleet leader and the world's most flown spacecraft, lifted off for the last time on Tuesday (April 17) to be delivered to the Smithsonian for its permanent display.

Discovery took off atop NASA's Shuttle Carrier Aircraft, a modified Boeing 747, leaving the Kennedy Space Center in Florida at 6:58 a.m. EDT (1058 GMT), just after dawn, for Washington, D.C. The ferry flight was expected to take about three and a half hours to complete.

Discovery, flying piggyback atop the jumbo jet, departed the runway and headed south to give the public along the Florida coastline and at the space center's visitor complex a last chance to see the shuttle in flight.

NASA planned for the carrier aircraft to then do a low flyby of the same runway from where it took to the air — and Discovery last landed from space in March 2011 — before bidding farewell to the orbiter's home and launch site for the past three decades. [Photos: Discovery's Final Piggyback Flight in Pictures]

NASA said the jumbo jet with its shuttle passenger would then head up the Eastern Seaboard, generally flying up the coastline in Georgia and the Carolinas before taking a more inland route over Virginia. The exact route and timing was dependent on weather and operational constraints.

The flight is expected to arrive in the airspace over D.C. between 10:00 a.m. and 11:00 a.m. EDT (1400 and 1500 GMT). Thousands of spectators were expected to gather Tuesday morning at the Udvar-Hazy Center's parking lot to be treated to a low flyover before Discovery and its aircraft carrier headed out over the nation's capital for an historic flyover of some of the city's landmarks.

NASA training jets were anticipated to catch up with the 747 and shuttle while over Washington to capture imagery of Discovery passing over the National Mall and its nearby monuments and federal buildings.

The carrier aircraft with Discovery was then scheduled to touch down at Washington Dulles International Airport at around 10:40 a.m. EDT (1440 GMT), coming to a stop on the runway just before 11:00 a.m. (1500 GMT).

Once on the ground, the paired air- and spacecraft will be moved to an isolated apron at the airport, where NASA has pre-staged large cranes to offload Discovery from the jet on Wednesday.

The first among NASA's shuttle fleet to embark on its new mission as a museum exhibit, Discovery is destined for the Smithsonian National Air and Space Museum's Steven F. Udvar-Hazy Center in northern Virginia. The veteran winged orbiter spent more than a year in space over the course of its 39 missions since 1984, more than any other vehicle to launch and return from Earth orbit.

The Smithsonian and NASA plan to welcome Discovery into the national aerospace collection during a ceremony to be held on Thursday (April 19). On that day, the shuttle will be towed from the airport to the adjacent Udvar-Hazy Center where it will be accompanied by a parade of many of its former mission commanders and the test shuttle Enterprise, which will be flown to New York on April 23.