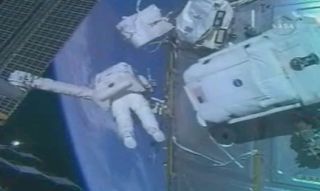 Expedition 16 spacewalkers Yuri Malenchenko (left) and Peggy Whitson prepare the International Space Station for the relocation of its PMA-2 shuttle docking port to the end of the Harmony node on Nov. 9, 2007.
(Image: © NASA TV.)

Expedition16 commanderPeggy Whitson and flight engineer Yuri Malenchenko cleared a space shuttledocking port for its planned Monday move to the end of the newHarmony node during a nearly seven-hour spacewalk outside the ISS.

?You guysdid a great job,? said Expedition 16 flight engineer Dan Tani, whochoreographed the extravehicular activity (EVA) from inside the ISS

The twoastronauts wrestled with tough bolts - one of which prevented the installationof a new handrail - and tackled stubborn electrical cables which Whitson saidfelt glued on at times.

?Lookslike, for the next EVA, we?ll need one of those hydraulic jaws-of-lifemachines,? Tani said.

TheExpedition 16 crew will either attach or disconnect some 77 electrical andcooling lines - half of them today - by the end of their spacewalk trio laterthis month, NASA said.

Theastronauts were initially slated to perform today?s spacewalk during NASA?srecent STS-120shuttle mission to the ISS, but vital repairs to a torn solar wing delayedthe activity.

Whitson andMalenchenko steppedoutside the station?s Quest airlock at 4:54 a.m. EST (0954 GMT) - a full hourearly - to begin the firstof three spacewalks planned for the next two weeks.

The spacewalks and two critical hardware relocations nextweek will equip Harmony with a shuttle docking port, then perch the nearly 16-tonhub to the front of Destiny. The docking port, known as Pressurized MatingAdapter-2 (PMA-2), currently sits at the tip of Destiny and also must be moved.

Harmony is an Italian-built module about the size of asmall school bus that is designed to serve as the docking point for Europeanand Japanese laboratories at the ISS. Astronauts installed the multi-port nodeat a temporary spot during the STS-120 mission, but must move it to a permanentberth before the EuropeanSpace Agency?s Columbus lab can launch toward the station aboard NASA?sshuttle Atlantis on Dec. 6.

Hassmann said that whether the ISS will be ready forAtlantis? launch, or need to ask shuttle officials to delay the orbiter?sSTS-122 mission by a few days, is still uncertain.

?From my perspective, I?m taking it one day at a time,?Hassmann said. ?I would say today it?s too early to say whether we?d be ready on[December] sixth, the seventh or the eighth.?

Once the station?s PMA-2 docking port is attached toHarmony on Monday using the outpost?s crane-like robotic arm, the entireassembly will be relocated to the front of Destiny on Wednesday. Two morespacewalks, on Nov. 20 and Nov. 24, will follow to make final power and coolingconnections between Harmony and the ISS.

The Expedition 16 astronauts have agreed to work throughtheir Thanksgiving holiday on Nov. 22 in a bid to ready the space station intime to launch Columbus in December, mission managers have said.

Columbus?s launch, as well as those of othercomponents built by NASA?s ISS partner nations, has been delayed for years asthe U.S. agency recovered from the 2003 Columbia accident and improved shuttleflight safety.

Friday?sspacewalk marked the 97th dedicated to space station maintenance orconstruction. It also marked Whitson?s second career spacewalk, for a totaltime of 11 hours and 20 minutes working outside a spacecraft. Malenchenko madehis fourth spacewalk for a total of 24 hours and 12 minutes.

?There wasno damage to either one of the overgloves or the gloves themselves on this EVA,which is great,? Gonzalez-Torres said, adding that Malenchenko did describe aslight layer separation on his overglove that appeared to be a manufacturing issue,not damage.

Spacesuitglove damage cut an August spacewalk short and astronauts now check theirgloves periodically to ensure they are safe to continue working outside theISS.

?I?mlooking through this window and all I can see is aluminum foil,? said Tani ofthe cover while the spacewalkers returned to the station?s airlock. ?It lookslike a turkey cooking in the oven.?

?That wouldbe us!? joked Whitson.