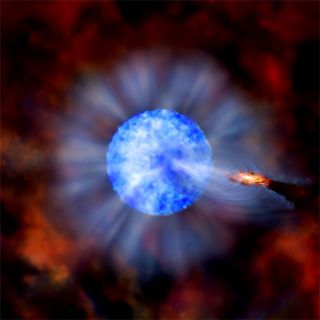 An artist's representation of M33 X-7: a binary system in the nearby galaxy M33, containing a massive blue star feeding material to a black hole surrounded by a small accretion disk.
(Image: © NASA/CXC/M. Weiss)

A stellar black hole much more massive than theory predicts is possible has astronomers puzzled.

Stellar black holes form when stars with masses around 20 times that of the sun collapse under the weight of their own gravity at the ends of their lives. Most stellar black holes weigh in at around 10 solar masses when the smoke blows away, and computer models of star evolution have difficulty producing black holes more massive than this.

The newly weighed black hole is 16 solar masses. It orbits a companion star in the spiral galaxy Messier 33, located 2.7 million light-years from Earth. Together they make up the system known as M33 X-7.

"We're having trouble using standard theories to explain this system because it is so massive," study team member Jerome Orosz of the University of California, San Diego, told SPACE.com.

The black hole in M33 X-7 is also the most distant stellar black hole ever observed. The findings, detailed in the Oct. 17 issue of the journal Nature, could help improve formation models of "binary" systems containing a black hole and a star. It could also help explain one of the brightest star explosions ever observed.

Black holes can't be seen, because all matter and light that enters them is trapped. So black holes are detected by noting their gravitational effects on nearby stars or on material that swirls around them.

The companion star of M33 X-7 passes directly in front of the black hole as seen from Earth once every three days, completely eclipsing its X-ray emissions. It is the only known binary system in which this occurs, and it was this unusual arrangement that allowed astronomers to calculate the pair's masses very precisely.

The tight orbits of the black hole and star suggests the system underwent a violent stage of star evolution called the common-envelope phase, in which a dying star swells so much it sucks the companion inside its gas envelope.

This results in either a merger between the two stars or the formation of a tight binary in which one star is stripped of its outer layers. The team thinks the latter scenario happened in the case of M33 X-7, and that the stripped star explodes as a supernova before imploding to form a black hole.

However, something unusual must have happened to M33 X-7 during this phase to create such a massive black hole. "The black hole must have lost a large amount of mass for the two objects to be so close," Tomasz Bulik, an astronomer at the University of Warsaw in Poland, writes in related Nature article. "But on the other hand, it must have retained enough mass to form such a heavy black hole."

The team estimates the black hole's progenitor must have shed gas at a rate about 10 times less than models predicted before it exploded.

"[M33 X-7] might thus provide both the upper and lower limits on the amount of mass loss and orbital tightening that can occur in the common envelope," added Bulik, who was not involved in the study.

If other massive stars also lose very little material during their last stages, it could explain the incredibly luminosity of 2006gy, one of the brightest supernovas ever observed, the researchers say.

One day, the lone star in M33 X-7 will also disappear, notes study team member Jeffrey McClintock of the Harvard-Smithsonian Center for Astrophysics in Cambridge, Mass. "This is a huge star that is partnered with a huge black hole," McClintock said. "Eventually, the companion will also go supernova and then we'll have a pair of black holes."

While 16 solar masses is hefty for a stellar black hole, it is miniscule compared with the black holes thought to lie in the heart of many large galaxies. Such "supermassive" black holes have masses millions to billions times that of our sun, but they are thought to form by mechanisms different from the stellar variety.