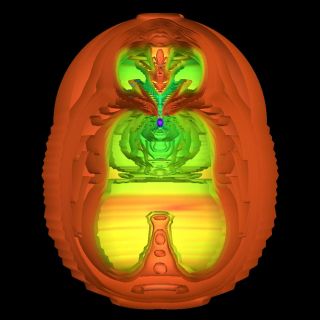 A cutaway view showing the inner regions of a star 25 times more massive than the Sun during the first split-second before exploding as a supernova. The purple represents the star’s inner core; green represents high heat content and brown is low heat content.
(Image: © Adam Burrows/University of Arizona)

Massive, dying stars vibrate like giant speakers and emit an audible hum before exploding in one of nature's most spectacular blasts, scientists say.

A new model developed by Adam Burrows at the University of Arizona and colleagues suggests that sound waves, not ghostly particles called neutrinos, deal the final blow to stars before they become supernovas.

Supernovas are powerful stellar blasts that briefly outshine entire galaxies and radiate more energy than our Sun will in its entire lifetime. Only a star that is between 10 to 25 times more massive than our Sun can become a supernova. After it has burned for 10 to 20 million years or so, the star runs out of fuel and develops a dense iron core about the size of Earth.

The iron core grows until its density becomes so great that it collapses under its own weight. The core contracts, but then almost immediately springs back again. This sudden rebounding action generates a shockwave that speeds outward. Scientists think it is this departing shockwave that triggers the supernova explosion.

The problem, however, is that in even the best computer simulations, the shock wave isn't powerful enough on its own to break through the dense layers of superheated gas that envelops the core.

In the models, the shock wave stalls as if muffled by a blanket and the supernova explosion never occurs.

In the late 1980s, scientists began experimenting with the idea that ghostly subatomic particles known as neutrinos might provide the extra power boost needed to complete the blast.

Neutrinos have no charge and are nearly massless. They are produced in vast quantities during the final stages of a massive star's life and stream out of the star's inner core. It was thought that these escaping particles might carry enough energy out of the core to the star's outer layers to complete the explosion.

But even when scientists incorporated the outflow of neutrinos into their computer simulations, it still wasn't enough to produce consistent supernovas.

The new computer simulation developed by Burrows and his team suggests that the neutrino-driven model of supernova explosion might be wrong.

The simulation involves more than a million steps-five times more than typical models--and encompasses a full second or more of stellar death, from core collapse right up to the instant the star goes supernova. Other models typically simulate only the first few hundred milliseconds before the explosion.

The team's model shows that after about half a second, the collapsing inner core begins to vibrate. After about 700 milliseconds, the vibrations become so energetic that they create sound waves with audible frequencies in the range of 200 to 400 hertz, or around middle C.

"Instead of neutrino's heating up the material behind the shock, we had acoustic power doing it," Burrows told SPACE.com. "The material on the inside is oscillating like a very, very strong speaker and sending out energy via sound."

In this scenario, the sound waves replace neutrinos as energy carriers.

"The sound waves propagate out through the material and heat it up," Burrows said. "It acts in a way similar to the way neutrinos would act but with more efficiency."

Stanford Woosley, a supernova expert at the University of California, Santa Cruz, said that implicating sound waves in supernova explosions is an interesting idea.

"It's been quite a while since there were any new ideas in this field," Woosley said. "If it works it would be a solution to a very longstanding problem."

Woosley cautioned, however, that computer simulations of neutrino-driven supernovas might simply not be sophisticated enough yet. The neutrino models could improve as scientists gain a better grasp of the physics involved.

Burrows said he expects many scientists to be skeptical of his team's results because it breaks from more than 40 years of traditional thinking.

"I'm providing a new mechanism that may or may not be true but it's very suggestive and deserves further scrutiny," Burrows said.

The study will be detailed in the April issue of Astrophysical Journal.