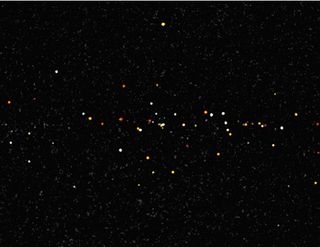 Shown here are higher-energy X-ray objects in or near our galaxy. The sources are largely stellar-mass black holes, neutron stars, pulsars and supernova remnants. The colors depict X-ray energy in which red is lower energy and blue is the highest; white is an even mix of lower-energy and higher-energy X-ray photons. These sources are not included in the Swift survey because they are too distant for the satellite to image.
(Image: © NASA/Swift/BAT/Markwardt et al.)

A new censuscompiled by astronomers contains the location of every local galaxy with a supermassive black hole at its center.

Called activegalactic nuclei, or AGN, these black holes have masses of up to billions ofSuns compressed into a region about the size of our solar system. The all-skycensus [image],performed using NASA's Swift satellite over a nine-month period, detected morethan 200 nearby AGN.

Supermassive black holes are thought to lie at the hearts of nearly every massive galaxy, but only a few percent appearto be active. The black holes ofsome galaxies, like our Milky Way,were likely once active but are now dormant for reasons that are still unclear.One idea is that they've simply consumed all the material in their immediatevicinities. Such dormant supermassive black holeswere not counted in the survey.

Among thekey findings from the survey [image]was the detection of AGN in so-called "starbursts"galaxies with intense star forming activity. These discoveries will enablescientists to test a theory called "co-evolution,"which states that black hole activity and star formation go hand in hand, theresearchers say.

Thefindings were presented at a press conference today at the meeting of theAmerican Astronomical Society's High Energy Astrophysics Division in San Francisco.