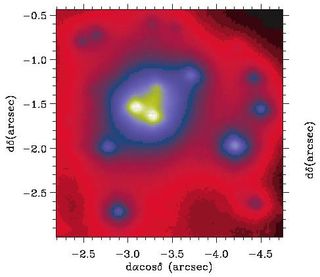 Astronomers think they have found a rare if not unique black hole very near the center of the Milky Way. That would make two of the beasts in that part of the galaxy.

The discovery also adds weight to the idea that black holes come in three sizes, essentially small, medium and large.

Stellar black holes -- the remains of collapsed stars, are common. They typically harbor as much mass as a few suns. And for years, scientists have known there are supermassive black holes in many galaxies; one with the mass of more than three million suns anchors the Milky Way.

The newly detected object appears to be an intermediate mass black hole, packing about 1,300 solar masses.

Intermediate mass black holes ought to exist, some theorists say, because they should have been the building blocks of supermassive black holes. A few should be left scattered around any respectable galaxy. But attempts to discover them -- data suggest two others exist in our galaxy -- have so far proved inconclusive.

Black holes can't be seen, because everything that falls into them, including light, is trapped. But the swift motions of gas and stars near an otherwise invisible object allows astronomers to calculate that it's a black hole and even to estimate its mass.

If the newfound object, catalogued as GCIRS 13E, is indeed a middleweight black hole, it is likely a rare variety, perhaps one of kind, that formed farther out and has been lured to the galactic center. It is now less than 1.5 light-years from the fringes of the known supermassive black hole. That's much closer than our Sun is to the next nearest star.

Orbiting the presumed middleweight are seven stars, each of which in its prime was more than 40 times the mass of the Sun. Even as corpses they contain five to 10 solar masses. The whole setup is racing around the galactic center at 626,300 mph (280 kilometers per second).

Theory holds that these stars could not have formed in their present location, because the gravity of the nearby supermassive black hole wouldn't have allowed a gas cloud to contract into a star, says study leader Jean-Pierre Maillard of the Institute of Astrophysics in Paris.

On the other hand, Maillard told SPACE.com, the stars could not have formed too far from their present location. Why? Because there wasn't time. Massive stars die young. The seven examined in the study can't be more than 10 million years old, or they would have exploded already. So the seven stars, along with the middleweight black hole, all had to migrate inward within the past 10 million years -- an eyeblink in the 13 billion years of the galaxy's lifetime.

All this means the cluster probably formed about 60 light-years out beyond its current orbit, the calculations show.

Maillard said the seven stars are the remains of what likely was once a cluster of many stars. In such a globular cluster, as astronomers call it, a middleweight black hole could develop through runaway star collisions, other research has found.

"It might be unique," Maillard said of the black hole candidate. Other middleweights might exist in the galaxy, he said, but probably none so close to the center.

There are other clues as to what's there. The location of the apparent middleweight black hole coincides with a source of X-rays noted by the Chandra X-ray Observatory. Black holes are known to create intense X-ray emissions as gas swirls inward and is superheated.

Maillard cautions, however, that more observations are needed to pin down with certainty the existence and identity of the object.

The discovery, announced last week, is detailed in the journal Astronomy and Astrophysics.