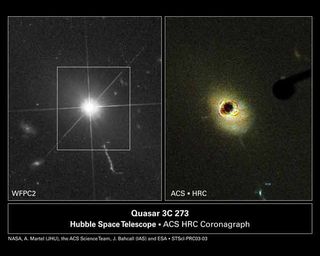 The nearby quasar 3C 273 is seen in a previous Hubble image (left) and a Hubble photo released in 2003 that reveals internal details (right). In the right-most image, light from the central bright portion of the quasar has been blocked.

Astronomers sifting through the radiation signals emanating from a distant black hole have separated the emission into its two component parts, a key step in understanding how such massive objects work.

Two Italian researchers pored through a series of black hole observations taken over about five years to separate its X-ray emissions into those belched by powerful polar jets and those originating from a disk of material swirling around the object's maw.

Pinpointing both X-ray sources from a general signal is a first for researchers, whose efforts have been typically hindered by the angles of view on black holes and interference from other radiation sources in space, researchers said. But the new research could bolster scientists' present understanding of the physics behind black holes and their roles as galactic engines.

"X-rays are emitted from a disk by a different mechanism than those emitted by the jet," said the study's lead researcher Paola Grandi, with the Istituto di Astrofisica Spaziale e Fisica Cosmica in Bologna, Italy, in an e-mail interview. "Separation of components has been the winning strategy to untangling [their] radiative contributions."

Although astronomers have never seen a black hole directly, they can infer their presence by gravitational effects on nearby stars and the radiation oozing from a disk of material that feeds the object. Supermassive black holes, which theorists say could sit at the center of some galaxies and hold more than a billion Suns of material, can also fire off powerful jets from their rotational poles, beaming X-rays, radio waves and other radiation into space.

Grandi and colleague Giorgio Palumbo, of Italy's Universita degli Studi de Bologna, studied a series of black hole observations taken over a wide X-ray spectrum by the Italian-Dutch X-ray satellite BeppoSAX between 1996 and 2001. The research will appear in the Nov. 5 issue of the journal Science.

The black hole in question appears to be the engine behind the active galactic nucleus (AGN) of a quasar called 3C 273, sitting some 3 billion light-years away in the constellation Virgo, Grandi said. One light-year is the distance light travels in a year, about 6 trillion miles (10 trillion kilometers).

Since 3C 273 was used as a calibration target for BeppoSAX researchers, Grandi and Palumbo found a number of observations that depict the object at different periods of activity. In some observations, the jet emissions overwhelm the meager emanations of the accretion disk, while in others the disk signals are stronger.

"This set of data provided, for the first time, enough information to obtain 'snapshots' of the AGN in different stages," Grandi said. "It is understandable that no one was able to observe this behavior before because broad band data combined with multiple exposures were not available."

In principle, Grandi and Palumbo's method could be applied to other AGN and black holes, so long as the right set of data is available. The BeppoSAX 3C 273 data, for example, has been available for years, though no one analyzed it as a whole until this recent study, Grandi said.

"There are so many things, in this field, which remain to be done," Grandi said, adding the method could help determine why only some of the black holes within AGN's spew off jets. "We may be lucky and find some other AGN to apply the same method."