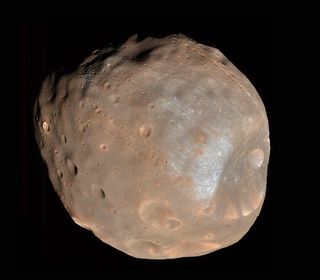 The strange grooves on the surface of the tiny Mars moon Phobos (seen here by NASA's Mars Reconnaissance Orbiter) were made by rolling boulders knocked loose by a giant impact, a new study suggests.
(Image: © NASA/JPL-Caltech/University of Arizona)

The weird linear grooves scoring the surface of the Mars moon Phobos were likely carved by boulders knocked loose by a giant impact, a new study suggests.

That impact created Phobos' most notable feature — the 5.6-mile-wide (9 kilometers) Stickney Crater, which is about one-third as wide as the moon itself.

"These grooves are a distinctive feature of Phobos, and how they formed has been debated by planetary scientists for 40 years," study lead author Ken Ramsley, a planetary scientist at Brown University in Providence, Rhode Island, said in a statement. "We think this study is another step toward zeroing in on an explanation." [The Grooves of Phobos: A Mars Moon Mystery in Pictures]

Mars has two tiny moons — Phobos and Deimos, both of which the Red Planet may have nabbed from the nearby asteroid belt long ago.

Phobos' parallel grooves were first spotted in the 1970s by NASA's Mariner and Viking missions. In the decades since, researchers have advanced many hypotheses to explain their origin. For example, they may have been carved by material blasted off Mars by powerful impacts. Or they could be strain marks showing that Mars' gravity is tearing Phobos apart. (Phobos orbits just 5,826 miles, or 9,376 km, from the Red Planet on average. Deimos lies slightly farther away.)

Or bouncing, rolling boulders freed by the Stickney-causing impact could have created the grooves. This idea was first advanced in the late 1970s by researchers Lionel Wilson and Jim Head, the latter of whom is a co-author on the new study.

In the new work, the researchers used computer models to simulate how debris set in motion by the Stickney smashup may have traveled across Phobos' surface.

"The model is really just an experiment we run on a laptop," Ramsley said in the same statement. "We put all the basic ingredients in, then we press the button and we see what happens."

What happened supports the rolling-boulder idea, study team members said. In the simulations, for example, rocks set in motion by the Stickney impact tended to travel on parallel paths, matching the observed groove patterns.

In addition, some of the simulated boulders traveled all the way around Phobos, rolling over the tracks of their fellow bounders. This could explain an oddity of the actual grooves — that some of them overlay one another.

There's another puzzling aspect of the Phobos features — a weird "dead spot" free of grooves. But the new modeling work has an answer for that, too: The dead spot is a low-elevation area just beyond a slight "lip" of rock.

"It’s like a ski jump," Ramsley said. "The boulders keep going, but suddenly there’s no ground under them. They end up doing this suborbital flight over this zone."

All in all, the work "makes a pretty strong case" that the "rolling-boulder model accounts for most if not all the grooves on Phobos," Ramsley said.

The new study was published online Nov. 16 in the journal Planetary and Space Science.