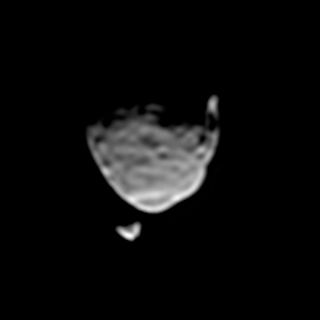 This view of the Martian moons Phobos and Deimos comes from a set of photos taken by NASA's Mars rover Curiosity on Aug. 1, 2013, as Phobos (the larger one) passed in front of Deimos from Curiosity's perspective.
(Image: © NASA/JPL-Caltech/Malin Space Science Systems/Texas A&M Univ.)

Of the four rocky, terrestrial planets, only Mars has more than one moon. The two small bodies that orbit the red planet are both smaller than Earth's moon, and raise a number of questions about the formation of the early solar system.

Phobos and Deimos bear more resemblance to asteroids than to Earth's moon. Both are tiny — the larger, Phobos, is only 14 miles across (22 kilometers), while the smaller, Deimos, is only 8 miles (13 km), making them some of the smallest moons in the solar system.

Both are also made up of material that resembles Type I or II carbonaceous chondrites, the substance that makes up asteroids. With their elongated shapes, they even look more like asteroids than moons.

Even from Mars, the moons don't look like moons. The more distant moon, Deimos, appears more like a star in the night sky. When it is full and shining at its brightest, it resembles Venus as seen on Earth. Phobos has the closest orbit to its primary of any moon in the solar system, but still only appears a third as wide as Earth's full moon.

Phobos orbits only 3,700 miles (6,000 km) from the Martian ground. Its surface is marred by debris that may have come from impacts on Mars. It travels around the planet three times a day, zipping across the Martian sky approximately once every four hours. The fast-flying moon appears to travel from west to east.

Deimos orbits much farther away, tending to stay 12,470 miles (20,069 km) from the red planet's surface. The moon takes about 30 hours, a little over a Martian day, to travel around its host.

Because of their odd shapes and strange composition, scientists thought for a long time that both moons were born asteroids. Jupiter's gravity could have nudged them into orbit around Mars, allowing the red planet to capture them.

But the orbits of the moons make such a birth appear unlikely. Both moons take stable, nearly circular paths around the red planet. Captured bodies tend to move more erratically. An atmosphere could have slowed the pair down and settled them into their present-day orbits, but the air on the Martian planet is thin and insufficient for such a task.

It is possible that the moons formed like the planet, from debris left over from the creation of Mars. Gravity could have drawn the remaining rocks into the two oddly shaped bodies.

Or, the moons could have spawned from a violent birth, much like Earth's moon. A collision, common in the early solar system, could have blown chunks of the red planet into space, and gravity may have pulled them together into the moons. Similarly, an early moon of Mars could have been impacted by a large object, leaving Phobos and Deimos as the only remaining bits.

A recent proposal combines the last two possibilities. According to researchers, a collision once scattered debris into a ring around Mars that accreted into the young moons. As Phobos approaches the red planet, it will be torn into a ring again, scientists predict.

"Solving the riddle of how Mars' moons came to be will help us better understand how planets formed around our Sun and, in turn, around other stars," Thomas Zurbuchen, associate administrator for NASA's Science Mission Directorate (SMD), said in a statement.

For years, scientists thought that Mars had no moon. Johannes Kepler suggested the possibility of two moons around the red planet, but only from a numerical standpoint; Earth had one moon and Jupiter, at the time, was known to have four, so the middle planet would likely have two.

It wasn't until American astronomer Asaph Hall made a thorough study of the planet in 1877 that the tiny, closely orbiting bodies were found. Hall discovered Deimos on Aug. 12 and Phobos on Aug. 18. The two tiny bodies had been hidden in the glare from the planet.

Hall named the two satellites for the sons of the Greek god of war, Ares (Mars to the Romans). The twin boys, Phobos (Fear) and Deimos (Dread or Panic), attended their father in battle.

But the sons won't be in attendance around Mars forever. Phobos is slowly spiraling inward at a rate of 6 feet (1.8 meters) every century. Within 50 million years, the moon will either collide with Mars or become a ring of rubble around it; stretch marks on its surface are likely early signs that the moon is breaking apart, one 2015 study said, although others have postulated these marks are instead grooves from Mars ejecta.

"We think that Phobos has already started to fail, and the first sign of this failure is the production of these grooves," Terry Hurford, a research assistant at NASA's Goddard Space Flight Center in Maryland, who led a study about stretch marks, said in a statement.

Deimos, on the other hand, is slowly drifting away from the planet.

While no mission has explored Phobos and Deimos as its primary objective, several spacecraft have snapped pictures during flybys. The first was NASA's Mariner 9 spacecraft, which orbited the planet Mars starting in 1971. It took pictures of Deimos and Phobos from afar and showed that these were small moons that looked like potatoes.

While rovers from the surface of Mars can't get close to the moon, they can take pictures from the surface of what is going on; NASA's Spirit, Opportunity and Curiosity have all taken images. In particular, the Curiosity rover has taken some great photos and videos of Phobos and Deimos, including footage of Phobos eclipsing the sun. To see these images, check out the following stories:

There are several proposed missions to the moons, most particularly to Phobos. The NASA Innovative Advanced Concepts program – which funds far-out ideas that could take decades to fly – has a proposal to explore Phobos' surface with hedgehog-like rovers.