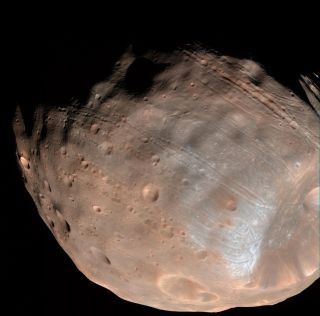 New research suggests that the long, thin grooves on the surface of Mars' moon Phobos are caused by the competing pull of the planet and the moon.
(Image: © NASA/JPL-Caltech/University of Arizona)

Long, thin "stretch marks" on the surface of Phobos are early signs that the Martian moon is falling apart, new research suggests.

Phobos is a tiny moon that is closer to Mars than any other moon in the solar system is to its planet. Over the course of every 100 years, the moon creeps about 6.6 feet (2 meters) closer to Mars. As the moon approaches, the effects of Mars' gravity strengthen, and research suggests that gravity should break the potato-shaped moon apart in 30 million to 50 million years.

"We think that Phobos has already started to fail, and the first sign of this failure is the production of these grooves," Terry Hurford, a research assistant at NASA's Goddard Space Flight Center in Maryland, who led the study, said in a statement. [Moons of Mars: Amazing Photos of Phobos and Deimos]

Researchers originally suspected that the grooves were created when a body hit Phobos and nearly tore the moon to pieces. But the grooves did not radiate from the crater left behind, called Stickney; rather, they came from a nearby area. Another explanation suggested that when material gets displaced off nearby Mars and hits Phobos' surface, it creates these grooves.

However, the new model Hurford and his colleagues created suggests the grooves are more like "stretch marks" on Phobos, an idea actually put forward in the 1970s and 1980s.

As Mars and Phobos tug on each other, researchers proposed, these forces produce stress fractures in the smaller body. The theory surfaced back when the Viking spacecraft first transmitted photos of Phobos — but at the time, scientists thought Phobos was a solid body, which would make the process less likely. Today, observations suggest Phobos is more of a loosely held rubble pile, with regolith (dust) of about 330 feet (100 meters) thick, NASA officials said in the statement.

Researchers also noted that some grooves appear younger than others, which fits in well with the stretch marks explanation. The work can also be applied to the future of Neptune's moon Triton, which is being pulled toward its own giant planet, as well as extrasolar planets, the scientists added.

The research was presented Nov. 10 at the annual meeting of the Division for Planetary Sciences of the American Astronomical Society at National Harbor, Maryland.