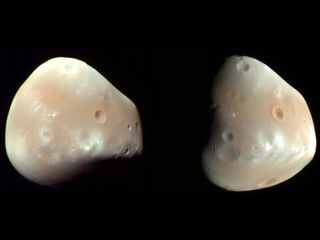 Images captured by NASA's Mars Reconnaissance Orbiter, reveal that the surface of Deimos is mostly smoooth, marred only by recent impact craters.
(Image: © NASA/JPL/University of Arizona)

Mars is the only terrestrial planet to host multiple moons. The smaller of the two, the lumpy moon Deimos, bears more resemblance to an asteroid than to most of the moons in the solar system, a similarity that raises questions about its formation.

On August 12, 1877, the focused search for Martian moons by American astronomer Asaph Hall resulted in the discovery of Deimos. Six days later, he identified the second Martian moon, Phobos.

The existence of the moons had been suggested years before, when Johannes Kepler proposed that since Earth hosted one moon and Jupiter four (as only the Galilean moons were known at the time), Mars might have two moons in orbit around it. However, no signs of such moons existed until Hall undertook his careful search.

Using a 26-inch refractor at the U.S. Naval Observatory in Washington, D.C., Hall made a methodical study of the region around the red planet. Peering closer to Mars than previous astronomers, he found Deimos circling only 14,576 miles (23,458 kilometers) from the center of the planet, traveling around its equator. Phobos orbited even closer in. Their close proximity and small size had kept them hidden in the glare from the planet.

Like many objects in the solar system, the Martian moons take their names from Greek mythology. In Homer's ancient poem, "The Iliad," Deimos (Flight) and Phobos (Fear) were the twin sons of Mars (Ares to the Greeks), and accompany him into battle.

It took almost another century for scientists to begin to understand the two tiny Martian moons. In 1971, NASA's Mariner 9 spacecraft became the first manmade satellite to orbit another planet. Images from the craft revealed that both Deimos and Phobos have lumpy, potato-like shapes, rather than being spherical like Earth's moon. Observations of Deimos were limited by the tidal locking of the moon to the planet, resulting in the same side always facing outward.

As the exploration of continued, scientists were able to glean more information about the two tiny moons. The Viking orbiters flew by in the late 1970s, with the second orbiter passing within 19 miles (30 km) of Deimos. The Soviet Phobos 2 mission, NASA's Mars Global Surveyor, and the European Mars Express all provided more clues about the two curious moons. Rovers from the planet's surface even got in on the act, with Spirit and Opportunity and Curiosity all providing images from the ground.

In 2016, a low-cost Mars orbiter mission called PADME (Phobos And Deimos and Mars Environment) was proposed to visit the moons. Among its major aims is to characterize where Deimos and Phobos came from — whether they were created at the same time as Mars, or captured from the asteroid belt, or somewhere else. PADME competed in NASA's Discovery Program but lost out to the Psyche and Lucy missions to visit asteroids.

NASA is considering sending humans to Mars in the 2030s, which led some scientists to suggest a mission to one of its moons instead might be beneficial. It would reduce the complication of landing on a surface with an atmosphere, although humans would need to be tethered to the surface of Deimos or Phobos if they wanted to stay put.

But future explorers may be in for a shock. Powerful solar eruptions could charge regions of the Martian moon to hundreds of volts, potentially affecting electronic equipment.

"We found that astronauts or rovers could accumulate significant electric charges when traversing the night side of Phobos — the side facing Mars during the Martian day," William Farrell of NASA's Goddard Space Flight Center, Greenbelt, Maryland, said in a statement. "While we don't expect these charges to be large enough to injure an astronaut, they are potentially large enough to affect sensitive equipment, so we would need to design spacesuits and equipment that minimizes any charging hazard."

The dark moons are made up of material similar to Type I or II carbonaceous chondrites, the substance of asteroids and dwarf planets such as Ceres. They are tiny, with the smaller Deimos having a radius of only 3.9 miles (6.2 km). This, combined with their potato-like shape, hints that both moons might be asteroids, pushed by Jupiter from the asteroid belt and snatched up by the gravity of Mars.

But this is far from conclusive. The close orbit of Deimos is nearly circular. It travels around the equatorial plane of Mars in 30 hours, a little over a Martian day. To reach such a stable orbit would require braking by the atmosphere, but the atmosphere on the red planet is thinner than on Earth.

Another possible origin for the moons is that dust and rock could have accreted, or drawn together, while in orbit around Mars. A third possibility includes a collision, much like the one that formed Earth's moon, with most of the large debris being shed from the planet's orbit, leaving behind only Deimos and Phobos.

A recent proposal combines the last two possibilities. According to researchers, a collision once scattered debris into a ring around Mars. As Phobos approaches the red planet, it will be torn into a ring again, scientists predict.

"Solving the riddle of how Mars' moons came to be will help us better understand how planets formed around our sun and, in turn, around other stars," Thomas Zurbuchen, associate administrator for NASA's Science Mission Directorate (SMD), said in a statement.

From the surface of Mars, the tiny moon appears star-like. At full moon, Deimos shines about as brightly as Venus. When the moon eclipses the sun, it appears as a small dot crossing its surface.

But the pair won't shine in the sky forever. Within 100 million years, the closer Phobos will collide with the red planet. Deimos will suffer the opposite fate. Its orbit is slowly drawing it away from Mars, and eventually the moon will be cast off into space.

Deimos has a number of craters caused by impact from meteorites. But craters on Deimos look different from those on most bodies in the solar system. When a rock collides with another body, material from the impact tends to fly up in the air and fall back to the surface, creating ejecta deposits. But the small size of the moon means that objects only need to travel 13 mph (20 km/h) to fly off into space. Although the moon is covered with regolith that may lie as deep as 328 feet (100 meters), it is created by meteorites pulverized by impact, rather than by castoff material.

Only two of the craters on Deimos are named. In 1726, English author Jonathan Swift cited Kepler when he referred to two Martian moons in his fictional work, "Gulliver's Travels." A few years later, the French writer Voltaire referenced two moons in a short story. The two craters bear the names of these authors.