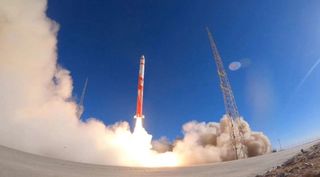 HELSINKI — Landspace suffered an issue with the third stage of its Zhuque-1 solid launch vehicle Saturday as it bid to become the first Chinese private launch company to reach orbit.

The three-stage Zhuque-1, named after the Vermillion Bird from Chinese mythology, lifted off from a mobile platform at the Jiuquan Satellite Launch Center, northwest China, at 4 a.m. Eastern (4 p.m. local time).

After nominal first and second stages and fairing separation an issue with the third stage resulted in the spacecraft failing to achieve orbit, Landspace CEO Zhang Changwu confirmed to press at the site following the launch.

The lost payload was the Weila-1 ('Future') satellite with a mass of 10-30 kg for China Central Television (CCTV) and developed by Beijing MinoSpace Technology company, founded in 2017. The satellite was intended to be used by the broadcaster for a science outreach TV series.

The launch was China's 30th of 2018 and the first to fail to reach its intended orbit. The previous failure took place in July 2017 with a first-stage engine failure afflicting the second Long March 5, delaying major lunar exploration and space station missions.

The Zhuque-1 orbital launch attempt was the first by a Chinese firm, following a government decision in late 2014 to open the space sector to private capital in the spheres of launch vehicles and small satellites.

The 19-meter-tall, 1.3-meter-diameter, 27-metric ton Zhuque-1 cost around $14 million to develop according to Chinese website thepaper.cn, following investment from partly-state-owned and private sector backers, and is targeting the emerging commercial space launch market for micro- and small satellites in China.

Landspace was previously planning to launch a different launch vehicle, named LS-1, and had in 2017 signed a contract with the Nordic company GOMspace to offer rideshare opportunities from the coast Wenchang launch center. However, a Chinese contractor providing crucial technology for the solid-propellant rocket ended cooperation with Landspace, prompting the development of Zhuque-1.

At least ten Chinese commercial launch companies are now operating, making for a crowded field of contenders, though at various stages of developing carrier rockets. 2018 has seen the first suborbital launches, with iSpace and OneSpace each carrying out two successful launches.

John Horack, the Neil Armstrong Chair in Aerospace Policy at the Ohio State University, told SpaceNews ahead of Saturday’s launch that, “there is no doubt that the commercial space launch market is real, and there is money to be made in almost all payload categories.

Horack notes however that commercial markets are hard to predict and in particular the factors of, “cost, ease of transaction, and reliability are the three main factors I see at play to drive success for Landspace and others.”

OneSpace, with facilities in the capital Beijing and Chongqing, southwest China, appears set to make the next attempt at a fully successful orbital launch following the test-firing of fourth stage engines for its OS-M rocket—designed to carry a 205-kilogram payload to 300-kilometer low Earth orbit—on Oct. 23.

A OneSpace representative confirmed to SpaceNews that the company is looking to launch its first OS-M near the end of 2018, having already tested first stage and other engines from July onwards.

Even with early success there will be a long way to go for Landspace, OneSpace and others before becoming truly competitive.

“Reliability is only built up over time, and therefore launch cadence and experience will have to be acquired before reliability can be truly assessed for Landspace or any other launch company. One should expect failures, as this is not an easy business. SpaceX, Orbital, Virgin, and others have all dealt with this,” Horack said, adding that, “early failures can sink a company almost before they start.”

Landspace looking to methalox and medium-lift

Landspace had stated at the International Astronautical Congress in Bremen, Germany, earlier this month that it saw its future in the development of medium-lift launchers powered by liquid methane and liquid oxygen propellant.

The two-stage Zhuque-2 (ZQ-2), which Landspace aims to manufacture next year and launch for the first time in 2020, will measure 48.8-meters tall with a diameter of 3.35 meters and be capable of delivering a 4,000-kilogram payload capacity to a 200-kilometer low Earth orbit and 2,000 kilograms to 500-kilometer SSO, using 80-ton and 10-ton methalox engines.

It is not immediately clear how Saturday’s launch issue will affect financing for development of the rocket or future launchers planned for the series, and if and when a second Zhuque-1 solid rocket launch could take place.

Landspace had announced plans to further, larger Zhuque-2 series three-stage rockets—using variable thrust engines to allow attempting vertical landings and reuse of first stages—capable of carrying up to 32,000 kilograms to 200-kilometer low Earth orbit. Saturday’s setback underlines that there are huge challenges in living up to such ambitions.