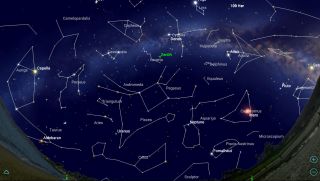 The October evening sky, shown here at 9 p.m. local time, features a mixture of late summer celestial sights in early evening and a winter preview for late-night skywatchers. Your favorite astronomy app can help you find the best objects to look at. On moonless nights, the splendors of the Milky Way can be hunted down with binoculars and backyard telescopes. When the moon is up, focus your attention on bright stars, multiple stars and star clusters.
(Image: © SkySafari app)

Early autumn brings ideal conditions for stargazing. The temperatures are comfortable, the pesky insects are gone, and the sun sets early enough to get plenty of stargazing in before the kids need to go to bed. In early evening, you can still catch the eye candy within the summertime Milky Way before it sets in the west, and in late evening, the winter constellations are climbing in the eastern sky.

In this edition of Mobile Astronomy, we'll highlight some of autumn nights' best objects for unaided eyes, binoculars, and backyard telescopes. Your favorite astronomy app can show you where to find these targets, tell you when they will rise and set, and inform you about their interesting history and science. We're not going to focus on the moon and planets — just the stars and deep-sky objects that appear annually at this time of year, divided into categories.

In the following sections, I have provided the common proper names or designations for the objects. Your astronomy app will recognize those names when you enter them in the search menu. Apps such as SkySafari 6, Star Walk 2, Stellarium Mobile and others will show you where to find the objects at the time you are observing. If the object is not above the horizon for you, adjust the app's time to find out when it will rise, or whether it has already set. [The Brightest Planets in October's Night Sky: How to See them (and When)]

Bright stars are fine targets for unaided eyes, regardless of the phase of the moon. Stars shine with a coloration that is produced by their surface temperatures, and this is captured in their spectral classification. In early evening during October, the three bright stars of the Summer Triangle are shining high overhead. Deneb, the highest; Vega, the westernmost; and Altair, the lowest, are all A-class stars that appear blue-white to the eye and have surface temperatures ranging from 7,500 to 10,000 kelvins (13,040 to 17,540 degrees Fahrenheit, or 7,226 to 9,726 degrees Celsius).

Double stars are pairs (or more) of stars that appear closely spaced together in the sky. They range from easy to discern pairs visible to unaided eyes to tighter pairings that need binoculars or a telescope to separate. In some cases, doubles are binaries — stars that are gravitationally bound to each other. Albireo, which marks the beak of Cygnus, the swan, is a line-of-sight double — stars at different distances from the sun that happen to occupy the same position in the sky.

The constellation of Lyra, the harp, is positioned high in the western sky in midevening during October. It consists of an elongated parallelogram oriented roughly left to right, plus the very bright white star Vega sitting only 2 degrees to the lower right. Keen eyes might reveal that the star Epsilon Lyrae, located just 1 degree (a finger's width) above bright Vega, is a double star. Binoculars or a small telescope certainly will. Examination of Epsilon at high magnification will reveal that each of the stars is also a double — hence its nickname, "the Double-double." These four stars form a true binary system — with each pair orbiting a common center on a time scale of many thousands of years. The stars at the right-hand end of Lyra's parallelogram are also doubles. Nasr Alwaki (also known as Zeta Lyrae), the star closer to Vega, is a tight double. Delta Lyrae, at the other corner, is a widely spaced double star visible to the naked eye. [Awesome Binocular Astronomy with the help of Mobile Apps]

Star clusters can be compact and small if they are far from the sun, or large and spread out if they are closer. These objects are best seen in binoculars and telescopes at low magnification. The best nights to hunt them are between last quarter, when the moon is waning and rising after midnight, and a few days after new moon.

The bright star Mirfak (also known as Alpha Perseii) is surrounded by a large cluster of stars known as Melotte 20, or the Alpha Perseii Moving group. The 100 hot, blue-white stars that compose the group share a common origin — they are all moving through the galaxy together. The grouping is approximately 600 light-years away and covers more than 3 degrees (or six times the apparent diameter of the full moon) of the sky. On mid-October evenings, Mirfak resides in the northeastern evening sky and climbs higher during the night.

When the moon is absent from the night sky, try exploring the numerous open star clusters distributed along the Milky Way, which rises from the southwestern horizon and arcs overhead to descend in the northeast. Many of the finest clusters are included in Charles Messier's list, which catalogs the best deep-sky objects. Start by finding the clusters with binoculars or unaided eyes, and then follow up with a telescope at low, and then higher, magnification. Particularly good open clusters include Messier 39 and Messier 29 in Cygnus; NGC7243 in Lacerta; the Wild Duck cluster (Messier 11) and Messier 26, both located in Scutum; the Sagittarius Star Cloud (Messier 24); and IC 4665, sometimes called the Summer Beehive, in Ophiuchus. In the northern Milky Way, look at Caroline's Rose (NGC7789) in Cassiopeia and the Double Cluster (NGC 884 and 869) in Perseus. [Messier's List: Hubble Telescope's Stunning Views of Deep-Sky Objects]

Nebulas, composed of cold hydrogen gas and traces of other elements, are far dimmer than sky objects made of stars. Many nebulas are complex structures of glowing gas energized by radiation from nearby stars, and then crossed by dark dust lanes positioned between Earth and the background gas. There are many fine nebulas that cover large areas of sky and are better viewed in binoculars, while some are small enough to fit within the field of view of a backyard telescope. All nebulas are better viewed when the moon is new and out of the night sky.

The constellation Cygnus is nearly overhead in the southern sky after dusk, and it passes the zenith at 8 p.m. local time. Dark moonless nights are ideal for seeing the Veil Nebula, a huge supernova remnant 2.5 degrees (or five full moon diameters across). This broken and tattered circle of glowing gas is centered 3 degrees south of the star Gienah (also known as Epsilon Cygni). The brighter western segment of the remnant, known as NGC 6960, is easily found where it passes across the naked-eye foreground star 52 Cygni. From that anchor point, you can follow its curve around to find the opposite side of the remnant known as the East Veil, or NGC 6992. There are more strands of nebulosity between those arcs.

The North America Nebula (also designated NGC 7000) is a glowing hydrogen cloud located less than 3 degrees below the bright star Deneb. Dark dust in the foreground creates the Gulf of Mexico portion of this aptly named nebula. The Pelican Nebula (also designated IC 5070), a smaller nebula sitting just to the upper right of the North America Nebula, is part of the same cloud — with dark dust dividing them. For best results, use the largest aperture telescope you can, and enhance these nebulas with an Oxygen-III or Ultra High Contrast filter.

Returning back to Lyra's elongated parallelogram, aim your telescope midway between the stars Sulafat and Sheliak, which mark the southern (left) end of the parallelogram. Messier 57, also known as the Ring Nebula and NGC 6720, will appear as a small, faint, gray ring. Higher magnification works well on this planetary nebula. This object is the corpse of a former star that had similar mass to our sun. It's located 2,280 light-years from Earth. [The Fabulous Lives of Nebulas]

Galaxies — looking in the cosmic "mirror"

Distant galaxies are obscured by the foreground material of our own Milky Way, so the best ones to observe hold positions in the sky well away from the Milky Way. Two relatively close galaxies are so large that they are only fully glimpsed in binoculars under very dark-sky conditions. Countless others are visible only in telescopes, especially when the moon is absent.

On October evenings, the Andromeda Galaxy climbs the northeastern evening sky. An all-night target, this large spiral galaxy, also designated Messier 31, lies only 2.5 million light-years from us, and subtends an area of sky measuring 3 by 1 degrees (or six full moon diameters long). Under dark skies, the galaxy can be seen with unaided eyes as a faint smudge to the left of the square of Pegasus. The three westernmost stars of Cassiopeia, Caph, Shedar and Navi, conveniently form a triangle that points toward M31. Binoculars will reveal the galaxy better. In a telescope, use low magnification and look for the two smaller companion galaxies, Messier 32 and Messier 110, that sit near the main galaxy's core. Astronomers believe that the Andromeda galaxy resembles our Milky Way.

The Triangulum galaxy, also known as Messier 33, is a large, nearly face-on spiral located 2.8 million light-years away. M33 is located 1.5 outstretched-fist diameters below Andromeda. It's close to the western edge of Triangulum, 7 degrees below the bright star Mirach (or Beta Andromedae). Under very dark-sky conditions, this low surface brightness member of our local galaxy group can be seen with the naked eye, making it the farthest object detectable by the unaided human eye. Binoculars and long-exposure images reveal that it subtends an angle of 1.0 by 0.66 degrees, with the long axis approximately left-right.

Many apps such as SkySafari 6 offer a Tonight's Best list tailored to your location. In SkySafari 6, you can tap the Actions and Settings icon for that list to sort by different criteria. Beginner skywatchers find the brightest targets easier to see, so try sorting with that method. The brightest targets will be listed first (including the moon and bright planets). You can also enable the Highlight Objects option, and the app will draw blue circles around every target. Good luck!

In future editions of Mobile Astronomy, we'll explore how constellations look in 3D , highlight some winter-observing targets, discuss how to use mobile apps to plan and log your astronomical observations, and more. Until then, keep looking up!

Editor's note: Chris Vaughan is an astronomy public outreach and education specialist at AstroGeo, a member of the Royal Astronomical Society of Canada, and an operator of the historic 74-inch (1.88-meter) David Dunlap Observatory telescope. You can reach him via email, and follow him on Twitter @astrogeoguy, as well as on Facebook and Tumblr.