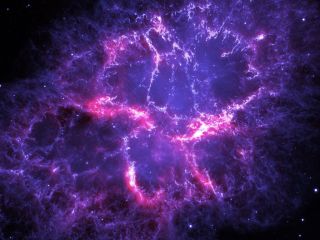 Paul Sutter is an astrophysicist at The Ohio State University and the chief scientist at Columbus, Ohio's Center Of Science and Industry (COSI) . Sutter is also host of the podcasts "Ask a Spaceman" and "RealSpace," and the YouTube series "Space in Your Face."

Glittering, glamorous, graceful. The latest red-carpet fashion statement? No, of course not. I'm talking about nebulas, the wispy clouds of gas and dust scattered through each galaxy. Earthly fabrics can't come close to the heavenly, tenuous beauty of these objects.

Peppered throughout the Milky Way, they provide amateur astronomers an eyeful of delight and give professional astronomers plenty to ponder. We see these objects in all sorts of shapes, sizes, colors and configurations, from almost-perfect spheres and shells to dazzlingly complex helices to tangled wrecks. But where exactly do they come from? And, perhaps more importantly, where are they going?

[Watch this video where I describe Messier's catalog of nebulas.]

To get a good look at nebulas, let's first look at the stars. Tiny, compact and dense — at least, astronomically speaking — a star is pretty much the opposite of a nebula. The power of a star comes from nuclear fusion, which occurs because of the intense pressures shoving elements together way past their personal comfort zones. That fusion creates heavier elements and a tiny bit of leftover energy, which is enough to maintain the star for millions (in the case of huge stars) to trillions (in the case of teensy-tiny-barely-above-brown-dwarf stars) of years. [50 Fabulous Deep-Space Nebula Photos]

No matter how long they last, stars are finite creatures. Thus, they must have come from somewhere and will end up going to somewhere else. Presumably, they didn't start life as tiny, dense balls and they won't end life the same way either. So where do stars come from, and where are they going?

Based on this article's topic, you can probably guess what the answer is: nebulas. Stars come from nebulas and end up turning into nebulas. Likewise, nebulas can generally be classified into two categories: about-to-be-stars and used-to-be-stars.

About to be stars

One could argue that the natural state of matter is clouds of stuff. In fact, I'm about to make just that argument. Stars depend on a specific process, nuclear fusion, to survive, and once that process ends, they quit being stars. The objects known as stars are altogether temporary. But a cloud of gas and dust? It can just hang out being a cloud of gas and dust for as long as it wants. If no forces nudge it one way or the other, it's perfectly happy just being what it is.

That will change only when a nebula does get nudged, say by a chance gravitational interaction with a neighbor, or by being too close to a nearby supernova (you gotta hate it when that happens). Once nudged, the nebula can become unstable, its natural self-gravitational pull overwhelming its equally natural gas pressure (an event marked by reaching a threshold dubbed the "Jeans instability"). Very quickly, pieces of the nebula branch and break off, smashing down in on themselves to get the fusion party started and make some stars.

The smashed-down bits turn into "dark nebulas" (hint: they're kind of black) as their high densities shroud the light coming from any newly forming stars. Fortunately, radio and infrared radiation penetrate even the densest of these nebulas, allowing astronomers to peer into these clouds' stellar wombs.

A typical cloud of gas, once unsettled, might make hundreds or even thousands of stars in a single batch. The largest and brightest of those stars will spew out tons of hot, heavy, high-energy radiation, exciting the molecules in the remaining nebula and causing it to glow rosy red.

Called "emission nebulas" — because their material is, well, emitting light — they won't last long. Those big, bright stars spewing radiation are sure to go supernova, ripping apart the already-tenuous veils of dust and gas and spreading this material so thin even the keenest observers are unable to distinguish it from the general spacey background.

Used to be stars

And that brings us to where nebulas come from in the first place. The answer, of course, is stars. When stars die, it's not pretty — or it's very pretty, depending on your point of view. [Supernova Photos: Great Images of Star Explosions]

The largest stars go off in spectacular fashion, unleashing almost all their unspent energy in a blast that can outshine entire galaxies (to be fair, the blast will last only a few days or weeks, while galaxies keep on shining for trillions of years). That blast naturally carries a lot of "stuff" far from the original star; basically, the whole star is turned inside out and goes from point-like to cloud-like in one fantastic event.

The ejected material rides the shockwaves at a healthy fraction of the speed of light, so it doesn't take long for a decent-size nebula to form. Even supernovas that occurred only hundreds of years ago (which in astronomical terms might as well be yesterday) have already become beautiful artistic displays. One such example is the Crab nebula, which is itself lit by the intense radiation still pouring out of the hot, left-over core of its dead star.

Stars like Earth's sun don't go off as intensely, but that doesn't mean they don't get to create their own masterpieces. Near the ends of these stars' lives, the switchover from hydrogen- to helium-based fusion in the cores leads to complex interplay in the stellar interiors. This causes the outmost layers to swell, expand and eventually slough off. The erratic nature of the star during this time pushes the outward-moving gas in weird directions.

The result: planetary nebulas, which unfortunately have absolutely nothing to do with planets. They come in a wild variety of shapes and patterns. They don't last long. Like their supernova cousins, they're lit by the remaining core of the star, and once that peters out after a few thousand years, the fireworks show is over.

But since stars like the Earth's sun are so common, this galaxy continues to produce new planetary nebulas, decorating the galactic disk like Christmas ornaments.

[Watch this video where I explain the life cycles of stars.]

The circle of stellar life

So that's it: Nebulas turn into stars, and stars turn into nebulas. It's a cycle that has persisted for over 13 billion years, starting when the first nebula scrunched down into a star. And it will continue to last for trillions more. Eventually, though, the nebulas will win: You need to pack enough stuff into a small enough space to make a star, and once you run out of opportunities you run out of stars, and the universe will return to its natural, long-term state: a bunch of gas and dust floating around.

Learn more by listening to the episode "Where Do Nebulae Come From?" on the "Ask a Spaceman" podcast, available on iTunes and on the Web at http://www.askaspaceman.com. Thanks to @bcmiller151 for the question that led to this piece! Ask your own question on Twitter using #AskASpaceman or by following Paul @PaulMattSutter and on facebook.com/PaulMattSutter.

Follow all of the Expert Voices issues and debates — and become part of the discussion — on Facebook, Twitter and Google+. The views expressed are those of the author and do not necessarily reflect the views of the publisher. This article was originally published on Space.com.