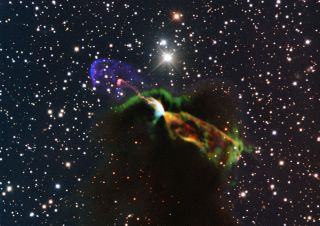 This image of Herbig-Haro object HH 46/47 combines radio observations acquired with the Atacama Large Millimeter/submillimeter Array (ALMA) with much shorter wavelength visible light observations from ESO’s New Technology Telescope (NTT). The ALMA observations (orange and green, lower right) of the newborn star reveal a large energetic jet moving away from us, which in the visible is hidden by dust and gas. To the left (in pink and purple) the visible part of the jet is seen, streaming partly towards us.
(Image: © ESO/ALMA (ESO/NAOJ/NRAO)/H. Arce. Acknowledgements: Bo Reipurth)

A huge radio telescope in Chile has captured dazzling new views of a baby star lighting up an interstellar cloud with jets of gas streaking through deep space at record-breaking speeds.

The ALMA radio telescope, a joint project between North America, Europe and Asia, recorded the star birth images. They show the nascent star about 1,400 light-years from Earth unleashing material at nearly 84,477 mph (144,000 km/h), which then crashes into surrounding gas, causing it to glow.

The glowing object spawned by the newborn star is what scientists call a Herbig-Haro object. European Southern Observatory officials used the new views to create a video tour of new star birth images. [See ALMA's photos of the baby star and Herbig-Haro object]

These new, detailed images showed that the material is streaking out of the star at about 40 kilometers per second (nearly 25 miles per second), which is about four times faster than any previous observation of carbon monoxide jets, scientists said. The discovery may help researchers understand the complex processes stars undergo during their birth.

"The sun is a star, so if we want to understand how our solar system was created, we need to understand how stars are formed," Héctor Arce, the lead author of the study appearing in the Astrophysical Journal on Aug. 20, said in a statement.

The new image of Herbig-Haro 46/47 (HH 46/47) produced by the ALMA telescope, its name is short for Atacama Large Millimeter/submillimeter Array, reveals two jets of material streaming away from the newborn star, one of which was never detected before.

One jet appears on the left side of the photo in pink and purple streaming partially toward Earth, while the orange and green jet on the right-hand-side show a jet pointed away from Earth.

"This system is similar to most isolated low mass stars during their formation and birth," Diego Mardones, a co-author of the study detailing the stellar findings said in a statement. "But it is also unusual because the outflow impacts the cloud directly on one side of the young star and escapes out of the cloud on the other. This makes it an excellent system for studying the impact of the stellar winds on the parent cloud from which the young star is formed."

ALMA's sensitive instruments took five hours to get these results. Earlier photos taken with other telescopes did not catch the second (orange and green) jet stream because dust surrounding the star obscured their views.

"ALMA's exquisite sensitivity allows the detection of previously unseen features in this source, like this very fast outflow," Arce said. "It also seems to be a textbook example of a simple model where the molecular outflow is generated by a wide-angle wind from the young star."

The $1.3 billion ALMA radio telescope is an array of 66 of individual radio telescopes that create one of the most powerful telescopes ever built. Each dish is up to 40 feet wide (12 meters) and can weigh 115 tons. The combined effort of the telescopes allows scientists to see celestial sights invisible in optical light because they are masked by gas and dust.