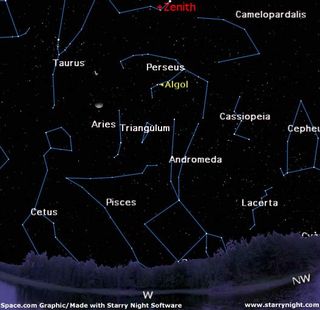 In the winter sky of the Northern Hemisphere, Perseus can be seen flanked by Taurus, Aries, Andromeda and Cassiopeia.
(Image: © NULL)

In the Northern Hemisphere, look to the fall and winter sky after sundown, and you'll see the Perseus constellation. The celestial hero is flanked by Aries and Taurus to the south, Auriga to the east, Cassiopeia to the north, and the Andromeda galaxy (named after Perseus' wife) to the west. Perseus is the 24th largest constellation in the sky. Its brightest star is Mirfak ("elbow" in Arabic), but its most famous star is Algol, better known as the Demon Star. Algol is a "variable star," which means it brightens and dims with regularity that's visible to the naked eye.

Starting in July and peaking in August, the Perseid meteor shower is one of the most reliable celestial shows, delighting Earthlings every year. The shower is caused by Earth's passage through debris left over from the Comet Swift-Tuttle, which last passed closely by Earth in 1992. The debris, made up of mostly sand-size pieces, careens into our atmosphere at 133,200 mph (214,400 kilometers per hour) and burns up, becoming "shooting stars," or meteors.

The meteors' trajectory makes it look like they originate in the Perseus constellation, hence the name of the meteor shower. In Greek mythology, the Persieds were Perseus' descendants.

Sharing a region of sky with the Perseus constellation is a vast neighborhood of galaxies called the Perseus cluster. It's a group of thousands of galaxies 240 light-years away from Earth, spanning 11 light-years across. Aside from galaxies, the cluster holds mostly incredibly hot gases, reaching tens of millions of degrees. The Perseus cluster is one of the most massive gravity-bound objects in the solar system and a region of high scientific interest.

In 2017, for example, scientists studying data from NASA's Chandra X-ray Observatory found a giant wave of gas rolling through the Perseus cluster. That wave looked like an enormous version of waves that scientists are familiar with, called Kelvin-Helmholtz waves, which occur when two fluids flow past each other, like wind blowing over water. The researchers figured out that the waves resulted from a much smaller galaxy cluster passing by the Perseus cluster closely enough to cause a disturbance, a wave that's lasted 2.5 billion years.

In mythology, Perseus was a hero who slayed the Gorgon Medusa, according to the Encyclopedia Mythica. He was the son of Zeus and Danae, and grandson to Acrisius. Because of a prophecy that any son born to Danae would kill Acrisius, when Perseus was born, Acrisius tried to drown child and mother by casting them into the sea in a chest. The pair was spared by Zeus and taken in by Polydectes, the king of Seriphus.

Polydectes kept Danae as a slave and sent the adult Perseus on a suicide mission to slay Medusa, whose gaze turned men to stone. But Perseus slew Medusa and took her head, overcoming many obstacles on his journey back to Seriphus to rescue his mother.

On the way, Perseus rescued Andromeda, a princess in Ethiopia, from a sea monster (the hero ended up marrying her, and the galaxy that bears her name appears in the sky close to the Perseus constellation). Perseus returned to Seriphus and rescued his mother, accidentally killed Acrisius (thus fulfilling the prophecy) and ended up venturing to Danae's home of Argos, where the hero became king.