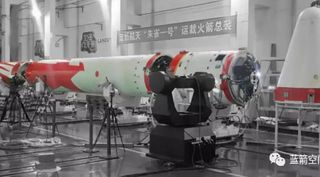 The assembled Zhuque-1 launch vehicle at a facility in Xi-an in August 2018.
(Image: © Landspace)

BREMEN, Germany – Chinese startup Landspace announced Oct. 1 that it will launch its Zhuque-1 launch vehicle later this month, which would be the first Chinese private orbital launch if successful.

At a news conference on the opening day of the International Astronautical Conference here, Landspace said it will launch the Zhuque-1 three-stage solid-propellant rocket near the end of October, with the exact date to be decided.

The rocket left a site in Xi'an Sept. 27 for transport to the Jiuquan Satellite Launch Center, one of four national launch sites, located in the Gobi Desert in the northwestof the country. [China in Space: The Latest News and Missions]

Zhuque-1 is a 19-meter-tall, 1.3-meter-diameter rocket with a takeoff mass of 27 metric tons and thrust of 45 tons, able to carry 200 kilograms to 500-kilometer Sun-synchronous orbit (SSO) and 300 kilograms to a 300-kilometer low Earth orbit.

Aboard the first flight will be the small "Future" (Weila-1) satellite for China Central Television (CCTV) for space science experiments, remote sensing and use in a television show.

A successful launch would be a landmark moment for China's emerging commercial space sector, which has so far seen two suborbital launches apiece by companies named OneSpace and iSpace. While being on the cusp of this achievement, Landspace is already looking to future developments.

Landspace CEO Zhang Changwu stated that a more important step was a firing last week of a combustion chamber as part of development of a new launch vehicle.

The test was a big step in the development of the 80-ton thrust liquid methane-liquid oxygen engine – named Tianque and developed from scratch – which will power the larger, medium-lift Zhuque-2 launch vehicle, and took place at the company's "intelligent manufacture base" in Huzhou, one of three Landspace sites along with research and development sites in Beijing and Xi'an.

The final engine will have specific impulse in vacuum of 350 seconds with a total weight of 1.3 tons and a nozzle diameter of 1.5 meters. "We're very close to full system, and this year we will test it at our own facilities," Zhang said.

Zhang said Landspace sees its future in providing medium-lift capabilities with liquid, rather than solid, launchers.

"We don't know how many Zhuque-1 flights will take place, but the development has been very important for the larger methane rockets," Zhang said.

The two-stage Zhuque-2, which Landspace aims to manufacture next year and launch in 2020, will measure 48.8-meters tall with a diameter of 3.35 meters and be capable of delivering a 4,000-kilogram payload capacity to a 200-kilometer low Earth orbit and 2,000 kilograms to 500-kilometer SSO, using 80-ton and 10-ton methane engines.

It will be the first in a series of methalox rockets. Powered by variable thrust methalox engines, Landspace will be attempting to land and reuse the first stages.

The future ZQ-2A, B and C three-stage rockets will aim to be able to lift 6,000, 17,000 and 32,000 kilograms to 200-kilometer low Earth orbit, respectively – underlining ambitions that currently go well beyond those of other emerging private launch companies in China.

Zhang says the methalox engine is a first for China, and that Landspace is the only private company

Asked if he sees Landspace and other Chinese private launch ventures as being disruptive to China's state-owned space contractors, Zhang responded that the company, "regards itself as supplementary factor in the space industry in China."

But there is ambition to grow, Zhang reveals: "In [the] future if we can prove our launchers are reliable and economic, we also believe we can get some missions from the government."

In response to a question on what support Landspace has had from the Chinese government and space contractors in terms of finance and technology, Zhang offered only that, "the most encouragement from the government is [that it] allows us to develop these technologies and give us permission to conduct the launch. This is already extremely important for us."