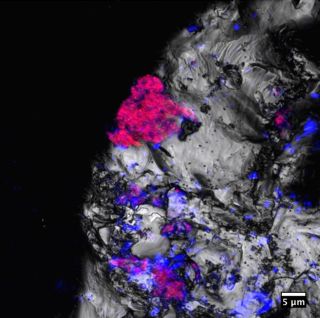 Life on Earth just got weirder, and that may have intriguing implications for life beyond this planet.

That's one takeaway from new research that identified cyanobacteria — a class of microbes known for turning sunlight into sugar — living deep below Earth's surface, far away from any ray of sunlight.

Because they're so tiny, cyanobacteria don't always get much love, but they're what turned Earth from an inhospitable rock (to us, anyway) into a green, growing world and first put the oxygen we rely on into the atmosphere. "What the cyanobacteria have invented has been brilliantly important through the history of life on Earth," Lynn Rothschild, an astrobiologist at NASA's Ames Research Center in California not involved in the new research, told Space.com. [Photos: Ancient Mars Lake Could Have Supported Life]

"They were able to turn our Earth into a place that is habitable for the animals that evolved here," Rothschild said. She called cyanobacteria "one-stop shopping" for turning what was easily accessible about 2.7 billion years ago in the early days of Earth — compounds like water and carbon dioxide — into the oxygen and sugar that animals need to survive. Some cyanobacteria can even turn the nitrogen that makes up most of our atmosphere into biologically useful ammonia.

All of that relies on the bacteria getting enough sunlight to conduct photosynthesis, the reaction that allows cyanobacteria, plants and similar organisms to feed themselves. So, deep within the surface of Earth is an unlikely hideout for cyanobacteria. But that's what the authors of the new research say they've found: cyanobacteria living 2,000 feet (600 meters) deep below the surface of a region called the Iberian Pyrite Belt in southwest Spain.

If the new research holds up, it suggests that some cyanobacteria found themselves unable to gather enough sunlight to complete photosynthesis, then threw in the towel and figured out how to feed themselves on hydrogen instead. (Hydrogen also fuels microbes found at the ocean bottom near deep-sea hydrothermal vents, which are also studied as potential analogues of extraterrestrial life.)

That big switch from photosynthesis to chemical subsistence is intriguing, because while Mars today isn't the sort of place life as we know it could thrive, it was many, many years ago. So, if cyanobacteria on Earth snuck below the surface and found a new way to make a living, does that increase the odds something similar happened with hypothetical cyanobacteria-like organisms on Mars?

It's an exciting proposal, Rothschild said. "The idea of surface organisms going underneath [the ground] is something that a lot of us talk about all the time," Rothschild said, but usually not in the context of cyanobacteria, which are considered too reliant on sunlight. "It provides a nice example of a test case of organisms that started at the surface and then were able to adapt to deep biosphere life."

This isn't the first time cyanobacteria have been spotted doing something unexpected, Daniela Billi, an astrobiologist at the University of Rome not involved with the new research, told Space.com. Just this year, a different team of scientists found that certain cyanobacteria could conduct photosynthesis using just infrared light, which is beyond the visible spectrum. The new research goes one step further, Billi said.

"It is a new metabolism that is really very challenging," she said, and an unexpected way of surviving. "It shows that there are pathways that we were not thinking about." [The Search for Life on Mars (A Photo Timeline)]

The new research, which was published yesterday (Oct. 1) in the journal Proceedings of the National Academy of Sciences, underscores one of the loudest choruses in astrobiological research: that life is weird, hardy and ubiquitous.

"Every time that we look in strange, extreme environments on Earth, life is always surprising us. We always find a form of life we were not thinking of or thought could not be there," Billi said. "We are very far from knowing life and its extremes."