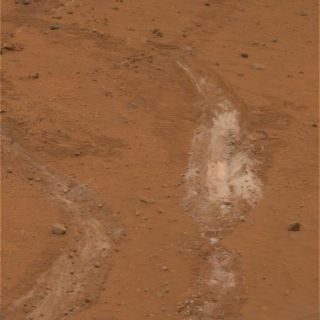 The jammed front wheel of NASA’s Spirit rover dug this trench inside Mars’ Gusev Crater in 2008. Spirit’s observations allowed researchers to determine that the white material is evidence of an ancient hydrothermal system on the Red Planet.
(Image: © NASA/JPL/Cornell University)

The search for signs of life on Mars needs a bit of a rethink, scientists argue in a new study.

Here on Earth, such ancient habitats have preserved bountiful evidence of ancient life — but that doesn't mean the same will hold true on the Red Planet, according to the study team, which was led by Joseph Michalski, an associate professor in the Department of Earth Sciences at The University of Hong Kong. [The Search for Life on Mars (A Photo Timeline)]

"Mars is not Earth," the researchers wrote in the study, a "Perspectives" piece that was published online today (Dec. 18) in the journal Nature Geoscience.

"We must recognize that our entire perspective on how life has evolved and how evidence of life is preserved is colored by the fact that we live on a planet where photosynthesis evolved," they said. "Even if photosynthesis did evolve on Mars, questions remain as to how successful surface life would have been, and whether evidence of that life could have been captured in the sedimentary record."

This evolutionary innovation therefore opened up vast amounts of livable space, allowing organisms to colonize surface and near-surface environments on land and at sea, scientists say.

The timing here is important, according to the study team. Mars was once relatively warm and wet —much warmer and wetter than it is today, anyway. But by 4 billion years ago, Mars' interior had cooled enough that its magnetic dynamo shut down, and the Red Planet lost its global magnetic field. (Earth still has a magnetic field, because our planet is 10 times more massive than Mars and therefore hasn't cooled nearly as much.)

This magnetic field had served to shield Mars' atmosphere from the solar wind, the stream of charged particles flowing from the sun. Its loss led to the stripping of this once-thick atmosphere and the transformation of the planet to the cold desert it is today — a process that was largely complete by about 3.7 billion years ago.

So, for surface life to really get going — and therefore have a good chance of being preserved in lake-bed deposits — photosynthesis would probably have had to evolve at least 1 billion years earlier on Mars than it did on Earth.

Michalski and his colleagues don't think that's a great bet. So they advocate for prioritizing spots where subsurface life may have once teemed on Mars — environments such as ancient hydrothermal systems, which may have been life's cradle here on Earth.

And you wouldn't necessarily have to dig deep to find such systems; NASA's Spirit rover stumbled onto one inside Mars' Gusev Crater back in 2008 when its wonky wheel scraped away some surface dirt.

Such reasoning could soon have real-world applications: In 2020, NASA plans to launch a life-hunting Mars rover that will collect and store rock samples for eventual return to Earth.

"These would be places where there was fluid flow in the crust, and where you get mixing between different fluids from different sources that have potentially different concentrations of important elements, as well as dissolved hydrogen, for example," Mustard told Space.com. (Hydrogen is a possible energy source for microbes.) "Those would be cool."

The main goal of the new study is "to get the larger scientific community thinking along these lines as we move toward continuing to search for potential evidence" of life and its precursor molecules, he added.