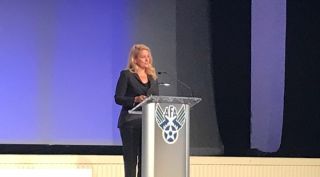 NATIONAL HARBOR, Md. — SpaceX President and Chief Operating Officer Gwynne Shotwell speaks to audiences around the world and gets lots of questions.

During an appearance on Monday at the Air Force Association's annual symposium, Shotwell was thrown a question she said she had never heard before: "Would SpaceX launch military weapons?"

"I've never been asked that question," Shotwell said somewhat surprised. Her response: "If it's for the defense of this country, yes, I think we would." [See the Evolution of SpaceX's Rockets in Pictures]

The room packed with Air Force service members and military contractors burst into applause. They seemed impressed that SpaceX is one of the world's coolest companies and also a staunch patriot.

Before the Q&A session, Shotwell delivered a 20-minute presentation that mostly featured promotional videos of SpaceX's spectacular Falcon Heavy mission in February. The videos also drew cheers from the crowd.

Shotwell didn't have much to say about the military launch business other than that SpaceX spent "a lot of time building our relationship with the Air Force. And we're now in a good position. We're competing. We're wining some, and losing some."

When asked how bad is the Air Force acquisition system, Shotwell said the Air Force has not cornered the market on red tape. The "most challenging" government customer for SpaceX has been NASA, she said. The company is preparing to launch its Crew Dragon capsule with astronauts onboard, a mission where failure is not an option, she said. The Air Force has asked SpaceX to make its rockets more reliable for national security satellites, but that still does not compare to the pressure of taking humans to space safely.

Shotwell defended SpaceX's culture of risk taking and aggressive innovation. "Failure is bad. But failure while you're trying and you're testing is not terrible. You're learning from it."

The next big challenge for SpaceX is the Big Falcon Rocket, with a second stage called Big Falcon Spaceship that the company believes can reach Mars. Shotwell noted that both stages are fully reusable.

"I hope to be doing hot tests next year with the second stage, the spaceship, and make an orbital flight in 2020," she said. "We would like to put large cargo on the surface of the moon by 2022. And we have our eyes on the prize to send people to Mars in 2024."

Shotwell admitted that those pronouncements might "sound crazy, but everything we've ever done has sounded crazy to people."

The huge second stage spaceship will travel half way around the world in under 30 minutes, she said. "Imagine what we could do for the defense of the United States."

Asked if she worries about national security space threats from China or Russia, Shotwell replied: "As the president of SpaceX, I am concerned about the competition coming from China and Russia because they're backed heavily by their governments. As an American citizen I worry more about China than Russia."

SpaceX last year flew 18 missions, beating any other company or country besides the United States. This year, SpaceX has completed 16 missions and is on track to complete 22 to 24 launches, while China attempts to carry out 40 (as of Sept. 9, it had already completed 24, surpassing its previous national record of 22 set in 2016).

"I was hoping to beat the Chinese this year," she said. "It does concern me that China is flying 40 times this year. And it's not for commercial customers. They have very few commercial customers. So what in the world are they doing?" she added. "The fact that I'm not beating them is a shame. The fact that they're launching 40 times is something we should all be worried about."

Shotwell echoed concerns voiced by Pentagon officials about China's pursuit of space capabilities. "They innovate in a different way, they go after ideas, they stick to a plan, and their pace is much faster."