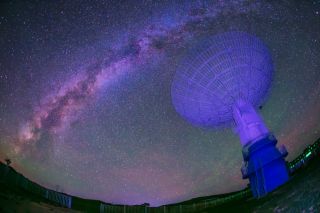 Get away from city lights, look up, and you'll see one of the wonders of the night sky — the bright cloudy bands of stars that make up the Milky Way galaxy. Our galactic home is vast and beautiful, but many mysteries about it remain.

For instance, despite decades of attempts, astronomers have yet to determine exactly how much our galaxy weighs, with estimates ranging from anywhere between 700 billion and 2 trillion times the mass of our sun.

Weighing a galaxy, especially while you're living in it, is no easy task. "It's like trying to take a census of the U.S. population but you can't use the internet and you can't leave the city you live in," astronomer Ekta Patel of the University of Arizona in Tucson told Live Science. Nobody can stick the Milky Way on a cosmic scale and just read out the result. [Stunning Photos of Our Milky Way Galaxy]

Part of the problem is that most of a galaxy's mass is invisible. Dark matter, an enigmatic substance that gives off no light of any kind, makes up around 85 percent of our Milky Way, Patel said. So simply counting the stars in our galaxy won't get you very far.

Therefore, researchers usually look at the orbit of some celestial object, Patel said. The method is based on the equations of gravity derived by Isaac Newton more than 300 years ago, which tell you that the speed and distance at which a smaller body rotates around a larger one is related to the mass of the larger object.

One method, used in a 2017 study published in The Astrophysical Journal, is to look at small satellite galaxies hundreds of thousands of light-years away that go around the Milky Way just as planets orbit a star. But there's a problem with these satellite galaxies. "Their orbits are billions of years long," Patel said, meaning that after a few short years, they will have barely budged and researchers can't easily determine their orbital speed.

In study published in June in The Astrophysical Journal, Patel and her colleagues tried a new method to weigh the galaxy. They looked at supercomputer simulations of virtual universes, which can reproduce many aspects of our cosmos, and tried to find examples of small galaxies that orbit larger ones.

Approximately 90,000 of these simulated satellite galaxies were then compared with data about nine real galaxies orbiting the Milky Way. The team picked the ones whose orbital properties most closely matched the real satellite galaxies and looked at the mass of the simulated galaxy they went around.

This gave them a pretty good estimate of our galaxy's true mass, which clocked in at 960 billion times the mass of the sun. Patel said her result is nicely in the middle of most previous ones, though there is still room for greater precision. This would likely come from the European Space Agency's Gaia satellite, which recently provided extremely good measurements of the orbital properties of 30 faint dwarf galaxies orbiting the Milky Way. Using this data along with the cosmological simulations to fine-tune the weight measurement is "on my to-do list," Patel said.

Knowing the galaxy's mass would help astronomers with many things, Patel said. For one, astronomers would be able to better calculate the orbits of satellite galaxies since these depend on the Milky Way's mass. Heavier galaxies also have more satellites orbiting them, and so far, telescopes have spotted about 50 galaxies going around the Milky Way. Since we don't know exactly how much the galaxy weighs, scientists are unsure exactly how many satellite galaxies they should expect to find. Finally, the Milky Way's true weight would help researchers know what proportion of its mass is dark matter versus regular matter.

Patel is hopeful that future studies and better data will eventually pin down this elusive unknown.