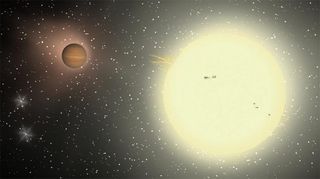 The largest exoplanet ever discovered is also one of the strangest and theoretically should not even exist, scientists say. Dubbed TrES-4, the planet is about 1.7 times the size of Jupiter and belongs to a small subclass of so-called puffy planets that have extremely low densities. The planet is located about 1,400 light years away from Earth and zips around its parent star in only three and a half days.
(Image: © Jeffrey Hall, Lowell Observatory)

The largest planet ever discovered is also one of the strangest and theoretically should not even exist, scientists say.

Dubbed TrES-4, the planet is about 1.7 times the size of Jupiter and belongs to a small subclass of "puffy" planets that have extremely low densities. The finding will be detailed in an upcoming issue of Astrophysical Journal.

"Its mean density is only about 0.2 grams per cubic centimeter, or about the density of balsa wood," said study leader Georgi Mandushev of the Lowell Observatory in Arizona. "And because of the planet's relatively weak pull on its upper atmosphere, some of the atmosphere probably escapes in a comet-like tail."

The planet's large mass-to-density ratio makes it an anomaly among known exoplanets, and its existence cannot be explained by current models.

"TrES-4 is way bigger than it's supposed to be," Mandushev told SPACE.com. "For its mass, it should be much smaller. It basically should be about the size of Jupiter and instead it's almost twice as big."

"TrES-4 appears to be something of a theoretical problem," said study team member Edward Dunham, also of the Lowell Observatory. "Problems are good, though, since we learn new things by solving them."

The planet is located about 1,400 light years away from Earth and zips around its parent star in only three and a half days. An international team of astronomers discovered it using a network of automated telescopes called the Trans-Atlantic Exoplanet Survey. TrES-4 was detected as it passed in front of, or "transited," its parent star, called GSC 02620-00648. The transit technique is the only planet-finding method that allows scientists to calculate the size of a planet.

TrES-4 "is the largest planet found so far for which we actually know the size," Mandushev said in a telephone interview. "There could be larger planets, but we have no way of measuring their sizes because they don't transit."

The parent star of TrES-4 is also unusual in that it is about the same age as our sun but much farther along in its evolutionary history. "Because it is more massive, it has evolved much faster," Mandushev explained. "It has become what astronomers call a subgiant, or a star that has exhausted all of its hydrogen fuel in the core and is on its way to becoming a red giant."

Our sun is not expected to become a red giant for another 5 to 7 billion years. When it does, the sun will expand to engulf the inner planets and possibly Earth. Because TrES-4 orbits so close to its star, it is certain to be consumed once the star becomes a red giant in about a billion years, Mandushev said.

GSC 02620-00648 is much more luminous than our sun and emits three to four times more energy per second. As a general rule, gas planets that orbit larger, more luminous stars tend to be puffier, but this does not explain TrES-4's anomalously large size.

"We actually looked at the energy which the planet gets from the star, and there's no way this can be the only explanation for how big the planet is," Mandushev said.