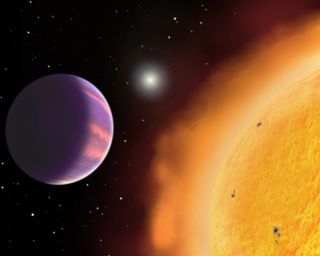 A planet lighter than a ball of cork is one of the puffiest alien planets known to date. Called HAT-P-1, the planet is about half as massive as Jupiter but about 1.76 times wider-or 24 percent larger than predicted by theory. It could float in water, if there was a tub large enough to hold it.
(Image: © David A. Aguilar/Harvard-Smithsonian Center for Astrophysics)

A newly discovered planet has one-quarter the density of water and would float if placed in a bathtub large enough to hold it.

"It's lighter than a ball of cork," said study team leader Gaspar Bakos of the Harvard-Smithsonian Center for Astrophysics (CfA).

Called HAT-P-1, the planet is about half as massive as Jupiter but about 1.76 times wider-or 24 percent larger than predicted by theory.

The finding, to be detailed in an upcoming issue of Astrophysical Journal, could force a revision of planet formation theories as astronomers struggle to explain what is causing the planet to swell.

HAT-P-1 belongs to a class of planets called "hot Jupiters" that are so named because they orbit much closer to their stars than Jupiter does to our Sun, despite being roughly the same size.

Using a network of small automated telescopes called HAT, astronomers spotted the object as it passed in front of, or "transited," its parent star 450-light-years away. The star is one member of a binary system called ADS 16402.

When HAT-P-1 transited its star, it caused a dip in the starlight reaching Earth, and astronomers were able to calculate the planet's mass and size.

HAT-P-1 is not the first low-density planet found outside our solar system, but it is the largest. HD 209458b, the first transit planet ever discovered, is also swollen and about 20 percent larger than theory predicts.

Scientists don't think it's a coincidence that out of the eleven planets have been found using the transit technique, two are lighter than expected.

"We can't dismiss HD209458b as a fluke," said study team member Robert Noyes, also of CfA. "This new discovery suggests something could be missing in our theories of how planets form."

It's still unclear what's puffing the planets up. Additional heat must seep into the planets' interiors to cause the swelling, but scientists don't know how this is happening. Simple solar heating by a star would not work, scientists say, or else all hot-Jupiter's would be expanded, not just two.