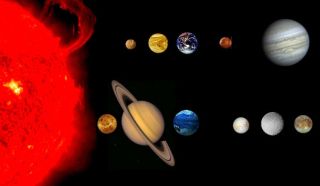 Schematic view (not to scale) with our solar system on the upper level and a habitable planetary system with a "hot Jupiter" on the lower level. Our solar system has four terrestrial planets: Mercury, Venus, Earth and Mars. Earth is in the habitable zone, where water can exist on its surface. The lower planetary system contains a hypothetical "hot Earth" a few times larger than the Earth but very close to the star, a theorized ocean-covered planet in the habitable zone, and several icy planets in the outer system.
(Image: © Sean Raymond/NASA)

To most common terrestrial dwellers, there's no place like Earth. But new simulations show that many Earth-like planets might exist outside of our solar system.

Through computer simulations scientists examined the formation and evolution of giant planet systems recently detected outside the Earth's solar system. Their results revealed that more than a third of them might contain planets that could potentially support life and could even be covered with deep oceans.

The study focuses on a type of planetary system unlike our solar system that contains gas giants known as "hot Jupiters" orbiting extremely close to their parent stars-even closer than Mercury to our sun, said lead author Sean Raymond, a researcher at the University of Colorado at Boulder.

Hot Jupiters are giant gas planets, with masses close to or greater than that of Jupiter's, orbiting around stars other than our sun.

These giants are believed to have migrated inward toward their parent stars as the planetary systems were forming, disrupting the space environment and triggering the formation of ocean-covered, Earth-like planets in a "habitable zone" conducive to the formation of life, the scientists reported in the Sept. 8 issue of the journal Science.

Hot Jupiters shift around the rotating disks of dense gas surrounding a newly formed star and fling rocky debris outward where they could merge to form planets like Earth, Raymond said.

At the same time, small icy bodies in the outer reaches of the disk are slowed down and pulled in towards the planets by the violent forces from the surrounding gas. These icy formations deliver water to the planets, which can then host huge oceans, the thinking goes.

Scientists had previously thought that as hot Jupiters plowed through the dense gaseous material on their inward migrations toward parent stars, all the surrounding material would be either "vacuumed up" or ejected from the system, Raymondsaid. "The new models indicate these early ideas were probably wrong."

After running simulations, based on theories of how the planets form in our solar system, that lasted more than eight months, Raymond and his team concluded that about one of every three known planetary systems could have evolved as Earth-like planets.

"I think there are definitely habitable planets out there," Raymond said. "But any life on these planets could be very different from ours. There are a lot of evolutionary steps in between the formation of such planets in other systems and the presence of life forms looking back at us."