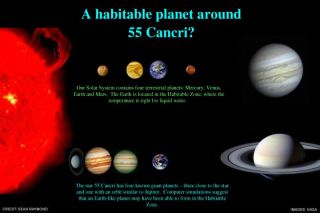 Our solar system compared to the one anchored by the star 55 Cancri, including the potential for a habitable planet.
(Image: © Sean Raymond)

Somedayastronomers will likely create a long list of Sun-like stars with Earth-like planets around them. But technologyhas yet to reveal such worlds, instead allowing the detection only of muchlarger planets.

Most of theroughly 200 known extrasolar planets are larger than Jupiter. Many complete their orbitalyears in just a few days. This proximity to their stars creates noticeablewobbles in the stars that make the planets detectable.

Butastronomers figure the giants probably formed farther out, in a disk ofmaterial swirling around a newborn star, and migrated inward. In doing so theywould have destroyed any fledgling habitable worlds.

In recentyears, with improving technology, researchers have found a handful of systemsthat could harbor life-bearing planets, in theory at least. A nearby starcalled 55 Cancri is one of the leading candidates.

The 55Cancri system involves three gas giant planets and another world that could be icy or rocky and isabout the size of Neptune. The setup is 41light-years from Earth and about 4.7 billion years old, comparable to our Sun.

Astronomershave said since 2002, when a planet was found at about thesame orbital distance from 55 Cancri as Jupiter is from the Sun, that the starhad the potential to harbor an Earth-sized world.

A newcomputer simulation shows that amid the giant worlds orbiting 55 Cancri, asmall rocky world could indeed have formed--in theory--and attracted enough waterto support life as we know it.

"Our models show a habitable planet, a planet with mass,temperature and water content similar to Earth's, could have formed," saidRory Barnes, a postdoctoral researcher at the University of Arizona.

Barnes andcolleagues ran several simulations of varying scenarios around four stars, eachknown to have at least two giant planets. They put moon-sized planetary embryosinto the systems during their youth and allowed them to evolve for 100 millionyears.

The idea,based on the leading planet-formation theory, is that small objects collectmore material and, if they don't collide with another big object, becomeplanets.

Only 55Cancri consistently yielded a world similar in size and orbital distance toEarth. Our planet sits in what's called a habitable zone, just the rightdistance from the Sun to allow liquid water.

"Our simulations typically produced oneterrestrial planet in the habitable zone of 55 Cancri, with a typical mass ofabout half an Earth mass," said Sean Raymond, a postdoctoral researcher at theUniversity of Colorado who worked on the project while a doctoral student atthe University of Washington. "In many of thesimulations, these planets accreted a decent amount of water-rich material fromfarther out in the disk."

The research, funded by NASA and the NationalScience Foundation, is described in a recent issue of the Astrophysical Journal.

A computer simulation is of course far fromreality. But research like this can guide astronomers to solar systems worthyof further investigation as search technology improves.

"Our assumptions are quite optimistic, butnot crazy by any means, and we start our simulations with a decent amount ofmaterial for terrestrial planets to form," Raymond told SPACE.com."If we are wrong about this, then only smaller, perhaps Mars-sized planetscould form in the habitable zone."

Two other stars yielded little suggestion of habitableworlds. Another star, named HD 38529, islikely to support an asteroid belt and objects up to the size of Mars, thesimulations indicate.

"In terms of the systems we looked at, 55Cancri has the largest zone between giant planets in which terrestrial planetsmay form and remain on stable orbits," Raymond said. "So, I think thechance of other planets existing in the system is pretty good, but it's certainlynot definitive at the moment."

Other modeling by Raymond has shown that only about 5percent of the known giant-planet systems are likely to have Earth-likeplanets. But, he and others have said, there may well be many solar systemssimilar to our own, in which the giant planets are all on the outskirts, thatsimply can't be detected yet.

TheWildest Weather in the Galaxy