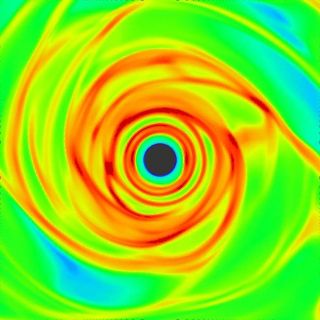 The denser, red rings near the center of this disk simulation may be protected areas where planets can start to form around a young star.
(Image: © Indiana University.)

A new twist in a long-standing debate might answer the fundamental question in the planet forming business: how to make gas giants like Jupiter and Saturn.

"The current focus is on how the big guys form," said Richard Durisen of Indiana University. "Their formation determines the long-term architecture of the planetary system."

Gas giants develop by swallowing up large quantities of the material in disks that swirl round newborn stars. There are two competing theories as to how they do this. One involves a rapid collapse of gas around a dense region, called a gravitational instability. The other follows a slower path with the buildup of a solid core that later attracts gas around it.

Durisen is advocating a middle road - a little gravitational instability mixed in with a little core accretion.

"There are two camps in planet formation. Dick [Durisen] is trying to form a third camp," said Alan Boss of the Carnegie Institution of Washington. Boss is a leading figure in the gravitational instability camp.

Durisen and his colleagues have run computer simulations of planetary disks, in which instabilities in the gas structure causes spiral arms to form. These arms eventually settle into dense, apparently stable, rings.

Although the simulations are not sophisticated enough to actually form virtual planets, Durisen's team speculates that the rings provide a haven for solid matter to accumulate and grow into "big guy" cores.

The idea might be testable: The spiral arms that form the rings may have left a record of their existence in tiny, glassy spheres found in billion-year old meteorites.

In the past there was one general theory for how Jupiter and the other planets formed.

"Core accretion has been what one might call the standard model of planet formation for two or three decades," Durisen told SPACE.com. "But people might hesitate using the term 'standard' now."

Core accretion requires bits of solid stuff to smash together to form bigger and bigger chunks. There is little doubt that this is how Earth and the other terrestrial planets came into being, most researchers agree. As Boss puts it: "We still want to make the Earth the old-fashioned way - one brick at a time."

But building gas giants from cores has come into question in recent years. One problem is that data from the spacecraft Galileo seem to imply that the solid core of Jupiter is less than three Earth masses. Accretion models require a core of at least 10 Earth masses, Boss said.

Another problem is that core accretion requires several million years to make a gas giant, whereas gas disks around stars like the Sun - which feed gas giant growth - typically do not last that long.

"There are disks that seem to last 10 million years, but the average is less," Durisen said. "People who work on core-accretion have been trying to speed it up, but it still takes millions of years."

If gas giants were rare, one could say they form only in the longest-lasting disks. But the current tally of extra-solar planets - some as massive as 10 Jupiters - is around 140. According to Boss, between 25 and 40 percent of stars likely have gas giants around them.

Gravitational instabilities presumably can make planets, or at least the loose fuzzballs that will condense into planets, in a matter of 100 to 1,000 years - by having dense regions, or clumps, of gas form inside a planetary disk. But despite signs of clumps in computer simulations, no one has ever proven they actually evolve into planets.

"It is not clear that disk instabilities work at all," said Jack Lissauer from NASA Ames Research Center. "The time-scales that are given are just characteristic times. No one has ever demonstrated that the models work."

Boss sees potential planet-clumps in his simulations that remain intact for thousands of years. But, he admitted, "We probably need to follow them for 100,000 years to be really sure they will survive."

A recent analysis of these sorts of models has found that getting instability in a disk is not a problem, but getting enough instability is hard to do.

"A very unstable disk will form planets, but to make it that unstable, you have to cool the disk very rapidly," Lissauer said.

The simulations of Durisen and company - unlike those of Boss - show that the cooling is too slow. Rapid cooling, according to Lissauer, may require a disk that is unreasonably massive.

Still, the fact that the disk is unstable, or non-uniform, gave Durisen's group an idea.

"Planet formation has been in this sort of quandary," he said. "But we had been aware of these rings, so we thought maybe this is the way out."

The rings, which form out of spiral arms rotating within in the simulated stellar debris disks, could perhaps give a boost to core accretion, since solid particles will be sucked into the middle of a ring.

To understand this, imagine a particle outside a given ring. It will feel a headwind from the gas associated with the ring. This headwind causes the particle to lose angular momentum and fall closer into the star - and toward the ring center.

Inside the ring, the opposite happens: a particle feels a tailwind that draws it away from the star, and into the middle of the ring. This vacuum action will collect more stuff in one place for core accretion.

As described in the February issue of Icarus, Durisen's group found that the gas rings remain in place over time. But they have not yet included solid particles into their simulations to see how this affects core accretion.

Both Boss and Lissauer think that the combination of gravitational instabilities and core accretion may solve some problems - like how one makes car-sized chunks stick together - but they are not convinced it will make planets faster.

"This doesn't solve the bigger problem of making a planet fast with a smaller core - one in line with the constraints from the cores of Jupiter and Saturn," Lissauer said.

So the debate goes on. One thing may be certain, however: instabilities wreaked havoc in the early solar system, leaving their mark in ancient meteorites.

Putting their differences aside, Durisen and Boss worked on a separate paper - to be published in the March 10 issue of Astrophysical Journal Letters - that showed that chondrules - glassy spheres that are found in many meteorites - were melted by shock waves generated by dense spiral arms.

Recent evidence has shown that some of the chondules are 4.6 billion years old - as old as the solar system itself.

Although these primordial shock waves might sound like they lend support to gravitational instability models, Boss said that the spiral arms are consistent with Jupiter and Saturn forming later through core accretion.

But with better meteorite dating, scientists may be able to catalog some of the violent processes that did affect the growth of the terrestrial planets: Mercury, Venus, Earth and Mars.

"What I think [the chondrules] will potentially do is help us map out what happened in the inner solar system," Boss said.

Although the meteorites come predominantly from the asteroid belt (between Mars and Jupiter), the same shocks that melted the material out there also blasted the stuff that later became "us," Boss said.