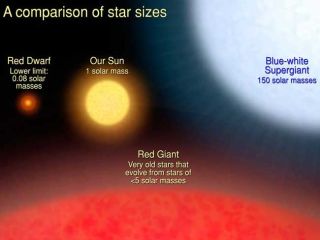 This illustration compares the different masses of stars. The lightest-weight stars are red dwarfs. They can be as small as one-twelfth the mass of our Sun. The heaviest-weight stars are blue-white super giants. They may get as large as 150 solar masses. Our Sun is between the lightweight and heavyweight stars. The red giant star at the bottom of the graphic is much larger than the other stars in the illustration. Its mass, however, can range from a fraction of the Sun's mass to a few solar masses. A red giant is a bloated star near the end of its life. In this brief phase, a star's diameter expands to several times its normal girth.
(Image: © NASA, ESA and A. Feild (STScI).)

A planet outside our solar system with a year roughly equal to Earth's has been discovered around a dying, red giant star.

Only about 10 red giant stars are known to harbor planets; the new solar system is among the most distant of these.

Our sun will become a red giant in a few billion years, likely vaporizing Earth.

The finding, to be detailed in the November issue of Astrophysical Journal, was made by a team led by Penn State astronomer Alex Wolszczan, who in 1992 discovered the first planets outside our solar system around a deadly, radiation-spewing star.

The new planet, spotted using the Hobby-Eberly Telescope at the McDonald Observatory in West Texas, circles its bloated parent star every 360 days and is located about 300 light-years away, in the constellation Perseus.

The red giant star is twice as massive and about 10 times larger than the sun. Its planet is about the size of Jupiter or larger and was discovered using the so-called wobble technique, in which astronomers look for slight wiggles in a star's motion created by the gravitational tug of orbiting planets.

The discovery could help astronomers understand what will happen to our sun's brood of planets when it exhausts its store of hydrogen fuel and its outer envelope begins to swell. When that happens in an estimated 5 billion years, our sun will be so big that it will engulf the inner planets and most likely Earth. But long before that happens, life on our planet will have perished and its seas will have boiled away.

"Our sun probably will make the Earth uninhabitable in about 2 billion years because it will get hotter and hotter as it evolves on its way to becoming a red giant," Wolszczan said.

Up from the ashes

Our sun's slow death will throw the orbits of the remaining planets out of whack. Some planets might collide with one another, and new ones could form from the resulting debris. And while all the organisms on Earth will have disappeared by that time, life could arise anew on other worlds in our solar system. Scientists speculate that there is more than enough time during a star's giant phase for life to evolve again.

As our sun expands, the spherical boundary within which liquid water can exist, called the habitable zone, will also expand, so that now frigid planets and moons in our solar system could become warm enough for life in the future.

"In our solar system, places like Europa—a satellite of Jupiter that now is covered by a thick layer of water ice—might warm up enough to support life for more than a billion years or so," Wolszczan said.

After the red giant phase, a star enters the final stage of evolution. It casts off its outer gas layers, leaving behind a compact stellar corpse called a white dwarf, which will smolder until all its remaining heat is radiated away.