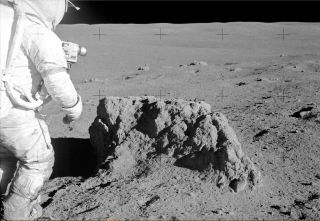 If life existed on the moon, we haven't found its remains yet.
(Image: © NASA)

Why are we talking about this? A new paper was published online today (July 23) in the journal Astrobiology with a thrilling headline: "Was There An Early Habitability Window for Earth's Moon?" Its associated press release had an even more exciting title: "Researcher sees possibility of moon life." Wowza! This is genuinely cool stuff. But it's important to understand what it's really saying and what it's not.

The paper, written by a pair of astrobiologists from Birkbeck College in London and the Technical University of Berlin, offers no evidence that life existed on the moon. In fact, it doesn't present new evidence of any kind. The paper doesn't represent the conclusions of any study at all. Instead, it's an argument, aimed primarily at other scientists, that, based on existing research, there may have been a period in the moon's history when living things on its surface wouldn't have immediately died. [Top 10 Amazing Moon Facts]

Today, the authors wrote, the moon is totally inhospitable to life. It has, they wrote, "no significant atmosphere, no liquid water on its surface, no magnetosphere to protect its surface from solar wind and cosmic radiation, no polymeric chemistry [the building blocks of life], and it is subject to large ... temperature variations."

In their paper, they pointed to recent research from a number of sources that suggests this might not always have been the case.

Volcanic gases could have spewed water vapor onto the moon's surface, the authors wrote, especially given recent evidence that the moon has more water than scientists once thought. The same processes might have thickened the atmosphere. The moon might also have formed a magnetic field similar to Earth's that would have deflected the worst stellar radiation, they said.

That solves three of the key problems with the moon's habitability. The researchers didn't directly address the moon's temperature swings again, but perhaps an atmosphere would have resolved that issue as well. Still, there's one piece missing: the building blocks of life.

No expedition to the moon has ever found amino acids or other chemicals that might link up to form living things, even as similar chemicals have turned up as far away as Mars. Perhaps, the researchers wrote, those chemicals might have formed natively. Otherwise, they might have arrived via asteroid impact — the same process some scientists think seeded Earth.

This new paper is best understood as a call to look for those chemicals more closely on the moon, especially in volcanic deposits dating back to those periods. But for now, there's no reason to think that life actually existed there — just that (maybe, perhaps) it could have.