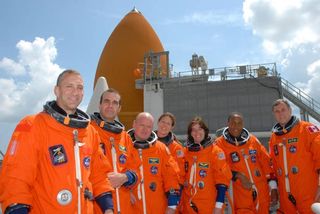 "It will be repaired and it will fly on this flight," Gerstenmaier said of the damaged ISS hardware, which if flown as-is would have prevented the collection of structural performance data on the space station's backbone-like main truss. If left in place, the damage would have posed no risk to astronauts aboard the space station, he added.

The subcontractor responsible for building the damaged computer box reported the apparent wire sabotage about a week ago, said Gerstenmaier, though he would not disclose the name of the subcontractor while an investigation is underway. The damage found on the ISS box was apparently caused during its preparations at the subcontractor's premises, which are not located in Florida, he added.

The officials did not discuss the details of an independent health panel which found, according to a report by the weekly trade journal Aviation Week & Space Technology, "heavy use of alcohol" by NASA astronauts before launch.

The report, posted to the journal's Web site, cites findings from one of two astronaut health panel committees which found that, on at least two occasions, astronauts were allowed to launch even after fellow spaceflyers and flight surgeons deemed them unfit from intoxication and possible flight safety risks.

"There has not been a disciplinary action or anything I've been involved with regarding this kind of issue," said Gerstenmaier, adding that it was inappropriate to delve deeper into the details of the report, as well as those of a separate astronaut health panel, which NASA will release Friday.

NASA plans to hold a press conference at 1:00 p.m. EDT (1700 GMT) Friday to discuss to two reports. Both studies were instigated earlier this year by the arrest of former astronaut Lisa Nowak, who is accused of attacking a woman she perceived to be a romantic rival for the affections of a fellow spaceflyer. Nowak has pleaded not guilty to charges of attempted kidnapping and battery.

Distractions aside, NASA remains committed to launching Endeavour on Aug. 7 at about 7:02 p.m. EDT (2302 GMT). The planned 11-day mission may be extended three additional days to deliver fresh cargo, spare parts and a new starboard side piece of the space station.

The only major obstacle currently standing between Endeavour and orbit is an unmanned rocket slated to launch NASA's Phoenix mission to Mars on Aug. 3 from a launch pad at the Cape Canaveral Air Force Station near NASA's Florida spaceport. That mission currently has about two liftoff attempts before Endeavour steps up to the launch plate, but the shuttle flight could be delayed a day or so to allow Phoenix more flight opportunities, Gerstenmaier said.

"Phoenix has essentially a month to get launched," Gerstenmaier said, adding that after that the red planet lander would have to wait two years until Mars and the Earth were in the correct orbital position for another attempt. "So clearly, in the overall sense, to get to Mars is pretty important and they have a pretty constrained launch window."