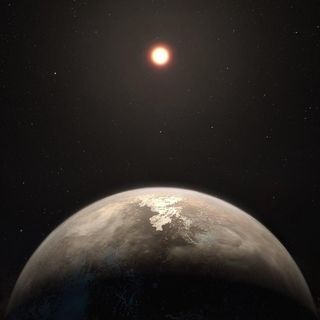 This artist’s illustration shows the potentially temperate planet Ross 128b, with its red dwarf parent star in the background.
(Image: © M. Kornmesser/ESO)

One of the nearest exoplanets to Earth may be a decent abode for life.

Ross 128b — which lies just 11 light-years from our planet — is likely a rocky and temperate world, a new study suggests.

"Although Ross 128b is not Earth's twin, and there is still much we don’t know about its potential geologic activity, we were able to strengthen the argument that it's a temperate planet that could potentially have liquid water on its surface," lead author Diogo Souto, of the Observatório Nacional in Rio de Janeiro, Brazil, said in a statement. [10 Exoplanets That Could Host Alien Life]

Ross 128b has excited and intrigued astrobiologists since its discovery last year. The planet appears to circle in the "habitable zone" of its host star — that just-right range of distances where liquid water could exist on a world's surface. (Ross 128b circles a small, dim red dwarf star, so the habitable zone is quite close in; the planet completes one orbit every 9.9 Earth days.)

Initial estimates also indicated that Ross 128b has a minimum mass just 1.35 times that of Earth and therefore stands a good chance of being rocky, just like our own planet.

"The ability of APOGEE to measure near-infrared light, where Ross 128 is brightest, was key for this study," study co-author Johanna Teske, of the Carnegie Institution for Science in Washington, D.C., said in the same statement. "It allowed us to address some fundamental questions about Ross 128b's 'Earth-like-ness.'"

The APOGEE data revealed the abundances of certain key elements in Ross 128, including carbon, oxygen, magnesium and iron. Because stars and their orbiting planets coalesce from the same massive cloud of raw materials, this information revealed some key characteristics about Ross 128b as well.

For example, the stellar abundances, combined with Ross 128b's known minimum mass, suggest that the planet's radius is less than 1.7 times that of Earth. That's the rough threshold beyond which worlds have a significant gassy envelope — meaning that Ross 128b is probably rocky.

In addition, the red dwarf's observed iron-to-magnesium ratio indicates that Ross 128b's core is larger than that of Earth, the researchers said.

The team also determined that temperatures at or near the "surface" of the star are around 5,400 degrees Fahrenheit (3,000 degrees Celsius). The researchers used this information, along with Ross 128b's radius and orbital distance, to figure out how much stellar energy the planet receives — and, therefore, how hot it's likely to be.

The result? Ross 128b probably has an "equilibrium temperature" of about 70 degrees Fahrenheit (21 degrees C). This shouldn't be taken as gospel, however; planets' temperatures depend greatly on the composition and thickness of their atmospheres, and the nature of Ross 128b's air is a complete mystery.

The new study was published last month in The Astrophysical Journal Letters.