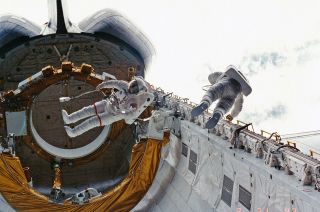 Astronaut Donald Peterson, who trained for a classified military space station program before becoming one of the first people to spacewalk from the space shuttle, has died.

Peterson's death on Sunday (May 27) at age 84 was noted by the Association of Space Explorers, a professional society for individuals who have flown in space.

"So sad to report that we have lost another member of the astronaut family," wrote the association on its Facebook page on Monday. "Fair skies and tailwinds, Don."

Peterson transferred to NASA in September 1969, two years after he was chosen by the U.S. Air Force among its third group of candidate pilots to crew the planned Manned Orbiting Laboratory (MOL). The clandestine reconnaissance platform was canceled however, before it could be launched, leading to Peterson and several of his fellow MOL trainees joining NASA's astronaut corps. [The U.S. Military's MOL Space Station in Pictures]

"You might think that there was a lot of— I mean, a bunch of screening and testing and all that. As far as I know, there was none," Peterson recounted in a NASA oral history in 2002. "There were fourteen people who were crew on the MOL program, and they took the seven youngest people."

"I am sure they did that because they figured it would be a while before we'd get a chance to fly," he said.

Arriving at the civilian space agency in the midst of the Apollo program, Peterson in fact waited 14 years for his opportunity to fly into space, ultimately being named to the maiden crew of the space shuttle Challenger.

On April 4, 1983, Peterson lifted off aboard the winged orbiter, together with STS-6 commander Paul Weitz, pilot Karol "Bo" Bobko and fellow mission specialist Story Musgrave. The five-day flight included deploying the first Tracking and Data Relay Satellite (TDRS-1) to support communications between the space shuttle in Earth orbit and mission control on the ground.

Three days into mission, Peterson and Musgrave made history, becoming the first astronauts to wear Extravehicular Mobility Unit (EMU) spacesuits and exit a space shuttle through its airlock for an extravehicular activity (EVA), or spacewalk.

"That was fun," recalled Peterson.

The 4-hour and 10-minute EVA had Peterson and Musgrave attach tethers and work their way to the back of the orbiter's 60-foot (18-meter) payload bay. There, they worked with the cradle that supported the TDRS for launch. It had been tilted forward to deploy the satellite. The two spacewalkers used a wrench to manually lower it, simulating what they would need to do if the cradle had become stuck. [The Most Memorable Spacewawlks of All Time]

"We had foot restraints, but it took so long to set them up and move them around, that we didn't want to do that. So I just held on with one hand, actually, to a piece of sheet metal, which is not the best way to hold on, and cranked the wrench with my other hand, and my legs floated out behind me," Peterson described. "As I cranked, my legs were flailing back and forth, like a swimmer, to react the load on the wrench."

The movement rotated the waist ring on his spacesuit, such that the seal keeping it air tight popped out.

"I've got an alarm," Peterson told Musgrave, knowing they were out of contact with mission control at the time.

"Story stopped what he was doing and came over. We were trying to check what was going on and the seal popped back in place and the leak stopped, so we went ahead and finished the EVA," Peterson said.

Before heading back into Challenger, Peterson and Musgrave went for a bit of ride in the hope of seeing the stars.

The two realized that the space shuttle regularly flies with its payload bay pointed towards Earth, but if it were to point the other way, out into space, as they orbited over the night side of the planet, they might get a good view of the universe.

"When [we] were on the daylight side at noon, [the shuttle] went into what [I] called the 'Ferris wheel mode," Peterson recounted in 2002. "You know how a Ferris wheel seat goes around and it never changes attitude? Well, that's what we did."

The maneuver worked great for getting photos of Earth below, but not so much for stargazing.

"There's lot of light in the payload bay, and the helmet's got these big [lights]. You couldn't see anything. I mean, it was just too much glare," explained Peterson. "So we got over in a corner [of the cargo bay] and kind of shielded our eyes, and you could see a little patch of sky but that was about the best we could do."

Peterson and Musgrave rejoined Weitz and Bobko inside Challenger and two days later, the four crewmates returned to Earth, landing at Edwards Air Force Base in southern California on April 9, 1983.

STS-6 marked Peterson's only spaceflight. He logged a total of 5 days, 23 minutes and 42 seconds traveling 2.1 million miles (3.4 million kilometers) while completing 81 orbits around the planet.

He resigned from NASA in November 1984.

Donald Herod Peterson was born Oct. 22, 1933 in Winona, Mississippi. He earned a bachelor of science degree from the U.S. Military Academy at West Point in New York in 1955 and received a master's degree in nuclear engineering from the U.S. Air Force Institute of Technology at Wright-Patterson in Ohio in 1962.

Prior to applying for the MOL program, Peterson served for four years as a flight instructor and military training officer with the Air Training Command, three years as a nuclear systems analyst with the Air Force Systems Command and one year as a fighter pilot with Tactical Air Command.

He graduated from the Aerospace Research Pilot School and accumulated more than 5,300 hours flight time, including more than 5,000 hours in jet aircraft.

Peterson retired from the Air Force as a colonel after his transfer to NASA. His first assignment in a civilian capacity was as a member of the Apollo 16 support crew, including serving as a Capcom (capsule communicator) in mission control.

His primary service to NASA though, was in support of the space shuttle.

"In fact, most of my career was spent working shuttle," noted Peterson. "I worked the avionics systems, which were the computers, guidance, navigation control, the air data system, some of the other things."

After departing the space agency, Peterson went to work as a consultant, advising on crewed aerospace operations.

"Basically I did the same kind of things as a consultant I had done as an astronaut. I worked for several different companies and I worked on things like crew interface and crew procedures and habitability, that is, all the things you put on a spacecraft so people can live there and be reasonably comfortable," said Peterson.

Peterson continued that work full time through 1993, and then part time, eventually retiring less then occasional public appearance by the early 2000s.

Peterson is survived by a son, Don, two daughters, Jean and Shari, and a brother, Gil. His wife of 60 years, Bonnie Ruth Love, preceded him in death in 2017.