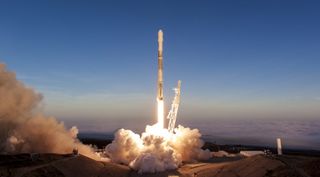 A SpaceX Falcon 9 lifts off March 30 carrying 10 Iridium Next satellites. A new report, and other data, states that SpaceX has recently raised $500 million, a round the company has yet to publicly confirm.
(Image: © SpaceX)

WASHINGTON — A new report concludes space ventures raised nearly $1 billion in the first quarter of 2018, half of that as a new funding round for SpaceX that has the company has yet to publicly announce.

The April 10 report by Space Angels, a fund that invests in early-stage space companies, concluded that there was $975.8 million in non-government equity investment in space companies in the first quarter of 2018. That would put the industry on a pace for nearly $4 billion for the year, a figure similar to the estimate made by Space Angels for investment in the industry in 2017.

Just over half of that total for the first quarter, though, came from a single investment identified by Space Angels: a $500 million investment in SpaceX  led by Fidelity Investments. That investment is intended "to drive development of their satellite communications network, Starlink," the report stated.

However, SpaceX and Fidelity have not disclosed this investment round, and SpaceX has not filed paperwork about it with the U.S. Securities and Exchange Commission. SpaceX declined to comment about the Space Angels report. [6 Fun Facts About SpaceX]

Christina Mannatt, head of marketing for Space Angels, said April 10 said the fund included the investment in its report based in part on a March 16 report by the technology publication TechCrunch, which mentioned only "multiple sources with knowledge of the round." She also cited inclusion of the funding in Pitchbook, an online database of investments, as well as "a number of our own confidential sources."

Recent media reports have also confirmed an investment in SpaceX of approximately $500 million. Those reports have said the round would value the company at between $24 and $27 billion, depending on the pricing of the shares.

Equidate, a company that offers a market for shares of privately-held companies, lists a new Series I investment in SpaceX, valued at $510 million, as of this month. The share price of that investment values the company at $27.4 billion. That's an increase of more than 25 percent over the previous funding round last year, where the company raised $450 million at a valuation of $21.5 billion.

Other major founding rounds cited in the report include $150 million raised by satellite connectivity provider Global Eagle in March from Searchlight Capital Partners. Global Eagle said it would use the funding to pay off a line of credit and for growth initiatives. Spaceflight announced a $150 million Series C round in March as part of its joint venture with Thales Alenia Space and Telespazio to develop the BlackSky imaging constellation.

The World View round was one of two Space Angels said it participated in during the first quarter. The other was a $1.6 million seed round it led in SkyWatch, a Canadian company developing a platform for satellite remote sensing data.

Space Angels said it was optimistic about the remainder of the year, citing in particular the emergence of small launch vehicles by several companies that can support the growth of other companies planning smallsat systems. "The Space Angels team continues to see high quality investment opportunities across all sectors and we plan to increase both the number of deals and size of our investments in the year ahead," it stated in the report.