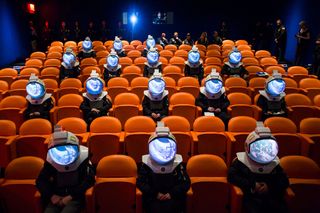 NEW YORK — Looking down at the vast curve of planet Earth hundreds of miles below, I can see its white cloud cover stretching over expanses of blue ocean.

This may be the closest I'll ever get to outer space, but I haven't left Midtown Manhattan. I'm peering at our distant world using a special "space" helmet that re-creates the dizzying sensation of hovering far above the planet.

Displayed across my visor — and on those of my fellow "astronauts" in the seats of a small theater — were excerpts from "One Strange Rock," a new documentary series from the National Geographic Channel that showcases the beauty of our planet as seen through the eyes of astronauts, the only people who have viewed it firsthand from hundreds of miles above Earth's surface.

At the theater event Wednesday (March 14), National Geographic offered a preview of the new series with a special presentation of video footage that mimicked the experience of seeing Earth from a vast distance. Though the series will air on television without this immersive experience, the "space" helmets will also be used in presentations and programs at schools and planetariums in several U.S. cities in the near future, according to a statement from Nat Geo. [What a View: Amazing Astronaut Images of Earth]

Take your protein pill, and put your helmet on

The helmet is somewhat like a virtual-reality (VR) headset, in that it replaces the user's perspective of the world around them. But its internally projected field of view is much wider than is typical for VR headsets, and users can freely move their heads within the helmet to look around at the screen, much as an astronaut might rotate their head to take in the view while on a spacewalk, according to the statement.

Each helmet contains a built-in media player and laser projector — along with a tiny exhaust fan — mounted at the top, and all helmets at the screening were synced wirelessly and activated simultaneously by remote. Footage that played on the inside of the visor was mapped to fit the curvature of the projection surface and projected with fisheye optics so that it did not look distorted.

In preparation for our "launch," we first buckled on a harness topped by a rigid base that covered our shoulders and necks; the helmets were attached after we took our seats, and once we lowered the visors, the show began, appearing on a curved screen just a few inches away from our noses.

After the screening, the helmets came off, and it was time for the real astronaut stars of the series to take the stage, to describe what it's like to view our home planet from space.

For former NASA astronaut Mae Jemison, who conducted experiments while on the Earth-orbiting Space Shuttle Endeavour in 1992, the experience reinforced her existing sense of her relationship to the planet and the other forms of life that we share it with — even the ones that are too small to see.

"I cannot process food by myself — I need the little microbes in my gut that are part of me to process my food," Jemison told Live Science. "For my food to be grown, I need the microbes and all the minerals that were in the soil. That's what this is about — this balance, and how we're connected to this world." [Earth Pictures: Iconic Images of Earth from Space]

And how did the views in "One Strange Rock" — in the helmets or on conventional screens — measure up against the real thing?

"I think it portrays that really well!" former NASA astronaut Mike Massimino, who performed two spacewalks to repair the Hubble Space Telescope in 2002 and 2009, told Live Science. "Especially the emotional aspects of it, and how we can use that experience of flying in space to tell the story of our home planet."

Astronauts are often asked to describe the feeling of being in space and looking down at Earth from far away — an experience that is shared by only a handful of people. "One Strange Rock" conveys not only how space looks to astronauts but how it feels to be out there, looking back at their distant home, retired Canadian Space Agency (CSA) astronaut Chris Hadfield, who served on three space missions, including a stint as commander of the International Space Station from 2012 to 2013, told Live Science.

Seeing Earth from a distance was "a deeply personal experience," Hadfield said.

Even without the helmets, "One Strange Rock" presents a unique — and emotional — view of Earth, from tiny air bubbles generated by algae, to the sweeping vista of our "blue marble" planet nestled against the inky, star-speckled backdrop of space.

"One Strange Rock" is executive-produced by Jane Root and her production company Nutopia, and premieres March 26 at 10 p.m. Eastern/9 p.m. Central time on the National Geographic Channel.