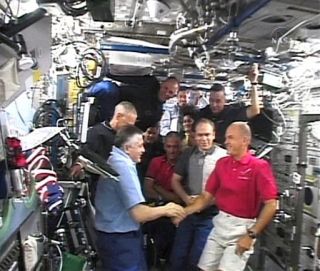 HOUSTON — Seven astronauts are tucked inside NASA’s shuttle Atlantis and set to depart the International Space Station (ISS) after a successful Monday test of the orbital laboratory’s Russian computer systems.

With warm words and bear hugs, Atlantis’ STS-117 crew and the station’s cosmonaut-astronaut Expedition 15 team said their last up-close farewells before shutting the hatch between their two spacecraft for the night.

“It’s been a great mission, but all good things come to an end,” Atlantis commander Rick Sturckow said during a brief ceremony. “We’ve had a wonderful time up here with the Expedition 15 crew.”

Hatches between Atlantis and the ISS were closed at 6:51 p.m. EDT (2251 GMT) after a busy joint mission made more so by the failure of six Russian control and navigation computers aboard the station last week. The computers were restored Saturday and passed a critical test earlier today to demonstrate they could maintain control of the station’s orientation.

“We’ve faced some adversity together,” Sturckow said of the computer issues, but added that the combined efforts of both crews, as well as flight controllers in Houston and Russia, were up to the task.

“We are one big crew, everybody,” Expedition 15 commander Fyodor Yurchikhin said during the farewell ceremony, adding that the two crews’ time together was too short. “Now we’d like to say goodbye shuttle, have a good safe landing.”

Earlier Monday, Williams gave an emotional goodbye to ISS flight controllers on Earth as she nears the end of a six-month mission that began in December 2006. Anderson, meanwhile, is due to stay aboard the space station until late October.

“I’m sad to say goodbye, but that means that progress is being made,” Williams said, her voice cracking at times. “You and the ISS will always be a part of me.”

“There was absolutely nothing anomalous out of the testing,” Engelauf said, adding that engineers are still trying to pin down what caused surge-protector like secondary power sources inside the Russian computers to fail. “We still haven’t found what folks would call a smoking gun.”

But engineers are confident they’ve found the source of what failed in the computers after a feat of teamwork by flight controllers and the joint ISS-Atlantis astronaut crew, Engelauf said.

“It’s been a really great mission,” he added.