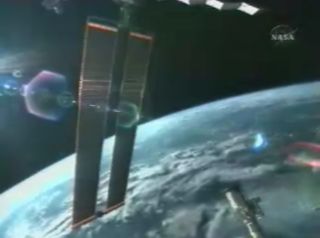 The starboard 1A solar array extends out from the newly delivered S4 truss at the International Space Station after a successful deployment on June 12, 2007.
(Image: © NASA TV.)

HOUSTON -- NASA chief Michael Griffin urgedspace agency employees to stay focused on their work despite a turbulent yearto date for the government organization.

?We?ve hada lot of distracting events in the news on NASA over the last five months,? Griffin told employees during an NASA-wide update from the agency?s Washington, D.C. headquarters. ?They?re depressing and distressing and distracting and diverting. Ijust want to urge everybody to keep the focus.?

The nearflawless June 8 launch and ongoing mission of NASA?s space shuttle Atlantisand its STS-117 astronaut crew to the International Space Station (ISS) is anexample of the payoffs to the space agency?s work, he said.

Over thelast half year, NASA has seen:

Griffin, himself, recently drew fire forstatements that publiclydoubted whether global warming was an issue humanity could and shouldrespond to.

?Iregretted having caused controversy,? Griffin said Tuesday. ?I didn?t do a verygood job of answering the question, and that?s bad. I need to represent theagency in a better fashion.?

While Griffin spoke, 10 astronauts aboard NASA?s space shuttle Atlantis and the InternationalSpace Station unfurled a pair of newstarboard solar arrays at the orbital laboratory.

The newsolar arrays, which smoothly unfolded from the tip of the Starboard 3/Starboard4 truss segments installed by the STS-117 and ISS astronauts during a Mondayspacewalk, will prime the orbital laboratory for the future addition of newhabitable modules and international laboratories.

?That?swhat we are really all about, not distractions,? Griffin added.