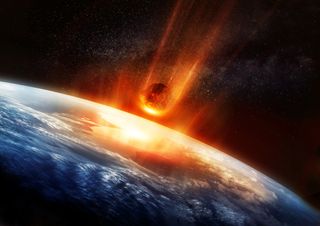 The 2 minutes of darkness caused by the total solar eclipse earlier this week may seem momentous, but it's nothing compared with the prolonged darkness that followed the dinosaur-killing asteroid that collided with Earth about 65.5 million years ago, a new study finds.

When the 6-mile-wide (10 kilometers) asteroid struck, Earth plunged into a darkness that lasted nearly two years, the researchers said.

This darkness was caused, in part, by tremendous amounts of soot that came from wildfires worldwide. Without sunlight, Earth's plants couldn't photosynthesize, and the planet drastically cooled. These two key factors likely toppled global food chains and contributed to the mass extinction at the end of the dinosaur age, known as the Mesozoic, according to the study. [Wipe Out: History's Most Mysterious Extinctions]

The finding may help scientists understand why more than 75 percent of all species, including the non-avian dinosaurs, such as Tyrannosaurus rex, and large marine reptiles, such as the plesiosaur, went extinct after the asteroid slammed into what is now Mexico's Yucatán Peninsula, the researchers said.

When the space rock smashed into Earth, it probably triggered earthquakes, tsunamis and even volcanic eruptions, the researchers said. The asteroid hit with such force that it launched vaporized rock sky-high into the atmosphere. Up there, the vaporized rock would have condensed into small particles, called spherules.

When the spherules plunged back down to Earth, they rubbed against one another, causing friction and heating to temperatures hot enough to ignite fires around the world. In fact, a thin band of spherules can still be found in the geologic record, the researchers said.

Most large Mesozoic land animals died in the asteroid's immediate aftermath, "but animals that lived in the oceans or those that could burrow underground or slip underwater temporarily could have survived," the study's lead researcher, Charles Bardeen, a project scientist at the National Center for Atmospheric Research (NCAR) in Boulder, Colorado, said in a statement.

"Our study picks up the story after the initial effects — after the earthquakes and the tsunamis and the broiling," Bardeen said. "We wanted to look at the long-term consequences of the amount of soot we think was created and what those consequences might have meant for the animals that were left."

Even though researchers found evidence for the asteroid in the late 1970s, there still isn't "universal agreement" on how long Earth was shrouded in darkness after the space rock smacked into the planet, Bardeen told Live Science. [Doomsday: 9 Real Ways Earth Could End]

Other researchers have estimated the soot produced by these ancient wildfires by measuring soot deposits in the geologic record. But Bardeen and his colleagues took another route: they used the NCAR-based Community Earth System Model (CESM) — a modern chemistry-climate model that factors in components related to the atmosphere, land, ocean and sea ice. This model allowed the scientists to simulate the effect of soot in the years following the asteroid impact.

"Different studies have assumed various types of particles including dust, sulfates and soot," Bardeen told Live Science in an email. "All of these particles can block enough sunlight to cool the surface, but only soot is so strongly absorbing that it is self-lofting, can heat the stratosphere and reduces sunlight at the surface light to very low levels."

Furthermore, the researchers used the most up-to-date estimates of the amount of fine soot in the geologic record — that is, 15,000 million tons.

"Our study shows it is dark enough to shut down photosynthesis for up to two years," Bardeen said. "This would have a devastating effect, particularly in the ocean, since the ocean relies upon phytoplankton as a primary source of food and loss of this would be catastrophic to the entire food chain."

Even if the soot levels had been one-third the actual amount, photosynthesis would have still been blocked for an entire year, the researchers found.

In addition to stopping photosynthesis, this worldwide cloud of soot would have prevented much of the sun's heat from reaching Earth. For more than a year following the crash, the land and oceans would have cooled by as much as 50 degrees Fahrenheit (28 degrees Celsius) and 20 degrees F (11 degrees C), respectively, the researchers found. [Crash! 10 Biggest Impact Craters on Earth]

In contrast, the upper atmosphere, known as the stratosphere, would have warmed because that's where the soot floated around, absorbing the sun's heat. These roasting temperatures would have depleted the ozone, and also allowed for vast quantities of water vapor to hover in the stratosphere. When this water vapor chemically reacted with the stratosphere, it would have created hydrogen compounds that led to further ozone destruction, according to the researchers.

As the ozone disappeared and the soot cleared, damaging doses of ultraviolet light reached Earth, harming life there, the researchers said.

When the stratosphere eventually cooled down, the water vapor there condensed and began raining, abruptly washing away the soot, Bardeen said. As some soot left, the air there cooled, which in turn led the water vapor to condense into ice particles, which washed away more soot.

Bardeen credited his friend Betty Pierazzo, a senior scientist at the Planetary Science Institute, a nonprofit headquartered in Tucson, Arizona, with securing funding from NASA to do this study. Unfortunately, Pierazzo died before research on the end-Cretaceous asteroid got underway.

Bardeen also noted several limitations, including that the model is based on a modern Earth, and it's unknown whether Earth at the end of the Cretaceous period had different atmospheric properties, such as different concentrations of gases.

The study was published online Monday (Aug. 21) in the journal Proceedings of the National Academy of Sciences.