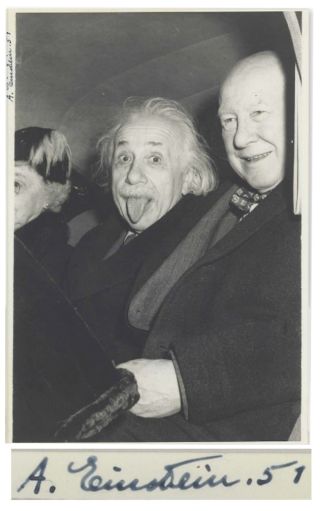 This autographed photo of Albert Einstein with his tongue out was sold at auction for $125,000.
(Image: © Arthur Sasse/Nate D. Sanders Auctions)

The image of Albert Einstein sticking his tongue out is probably one of most ubiquitous (and memorable) photos of the Nobel Prize-winning physicist. For decades, it has papered the walls of middle-school science classrooms and college dorm rooms. But now, someone has purchased the real thing for $125,000.

The autographed print was sold Thursday (July 27) by the Los Angeles-based Nate D. Sanders auction house to an unnamed buyer.

The picture had been taken after Einstein's 72nd birthday party at Princeton University on March 14, 1951.

As the story goes, Einstein stuck his tongue out at a group of photographers who were trying to get the scientist to pose for them as he left the party. Photographer Arthur Sasse of the wire service UPI got the lucky shot. [8 Ways You Can See Einstein's Theory of Relativity in Real Life]

Einstein himself was a fan of the photo and even asked UPI for nine prints to use as personal greeting cards, according to the auction house.

Most of the prints were cropped to include only Einstein's face, but the 7x 10-inch print that was sold this week offers a slightly more extended view, showing Einstein between Frank Aydelotte, an English professor and head of the Institute of Advanced Study at Princeton University, and Aydelotte’s wife, Marie Jeanette.

The print is even signed by Einstein along the left margin, "A. Einstein .51."

Prints, letters and other memorabilia associated with Einstein often draw high bids at auctions. Earlier this year, someone spent nearly $54,000 on Einstein's 1953 written response to a physics teacher who seemed to have questions about the theory of special relativity. An Einstein-inscribed Bible was sold for $68,500 in 2013. And a 1939 letter Einstein wrote to a New York hat merchant who helped Jews escapethe Nazi regime sold for $12,500 in 2014.

The auction of Einstein’s "God letter" was perhaps the most remarkable in recent years. The letter, in which Einstein expresses his views that religious beliefs are "childish," sold for just over $3 million on eBay in 2012.