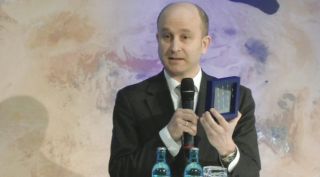 Holger Krag, head of the European Space Agency's Space Debris Office, only 60 percent of all missions currently end with a successful disposal of the satellite in line with orbital debris mitigation guidelines promulgated by the United Nations.
(Image: © ESA video screenshot)

LONDON — As the amount of debris in low-Earth orbit continues to increase, experts at a recent conference called for both improved efforts to track debris as well as national legislation to mitigate that growth.

Delegates at the Seventh European Conference on Space Debris, held at the European Space Operations Centre in Darmstadt, Germany, from April 18 to 21, warned that without improved measures, a long-feared cascade of debris that renders low-Earth orbit useless could occur.

According to Holger Krag, head of the European Space Agency's Space Debris Office, only 60 percent of all missions currently end with a successful disposal of the satellite in line with orbital debris mitigation guidelines promulgated by the United Nations. [7 Wild Ideas to Clean Up Space Junk]

"We have to ask ourselves the question, what is the reason for that?" said Krag during the conference's final day. "It could be operational paradigm, it might be technical failure, it might also be the lack of technical solutions that make the implementation of these measures too costly or complicated."

Strong national laws requiring satellite operators to remove spacecraft from orbit at the end of their missions are needed to get the worsening space junk problem under control due to the absence of binding international regulations, attendees said.

The situation in low Earth orbit in particular is getting progressively worse with some claiming to observe the first indications of the feared Kessler Syndrome, an unstoppable cascade of devastating collisions.

Donald Kessler, who first predicted the syndrome that now bears his name in 1978, said that a new study found about 10 percent of satellites in low Earth orbit currently experience potentially devastating collisions with small pieces of debris. Such collisions are similar to the one that punched a 40-centimeter hole into the solar panel of ESA's flagship Earth observation satellite Sentinel 1A last August.

"We had a pretty large sample of satellites that we looked at and more than 10 percent of them experienced events similar to the Sentinel 1A, such as sudden momentum changes," he said. "All of those events occurred within 45 degrees of the polar regions."

Unlike Sentinel 1A, these satellites did not have cameras onboard, which would have enabled their controllers to identify exactly what happened.

The Sentinel 1A collision produced seven pieces of debris currently tracked by the U.S. Space Surveillance Network. One of these fragments later got dangerously close to Sentinel 1A's sister spacecraft, Sentinel 1B.

Debris smaller than about 10 centimeters across is currently impossible to track. That means operators can't be alerted to the imminent danger.

"There are about 750,000 flying bullets about one centimeter in size, such as the one that hit Sentinel 1A, and approximately 150 million objects at around one millimeter," said Krag.

Small debris was one of the key issues at the conference, with the community calling for greater efforts to monitor such objects.

"We need to know is what is going on with the smaller sizes in the range from millimeter to centimeter as these affect the most spacecraft," said Kessler. "We also need to look at secondary debris, the really small particles, and how these are eroding spacecraft surfaces."

In addition to improving ground-based telescopes, the delegates agreed on the importance of in-situ measurements to gain a better understanding of the amount and behavior of very small debris.

"For sub-millimeter objects, we need to do in-situ measurements," said J. C. Liu, who leads NASA's Orbital Debris Program Office. "We haven't done anything like this since the space shuttle."

NASA plans to deliver an experimental sensor, the Space Debris Sensor (SDS), to the ISS in November. The SDS, developed by the Orbital Debris Program Office, will characterize the population of the tiniest debris particles at the station's altitude. The office is also looking for a suitable mission to send a similar sensor to an altitude of 600 kilometers.

Spacecraft operators all around the world currently rely on the U.S. Space Surveillance Network to receive warnings about possible collisions with larger objects. Krag has called on European players to step up their contribution to space debris monitoring.

"We don't need to have full autonomy, but there must be a stable contribution coming from Europe," Krag said. "What we have to do is to bundle what we are doing in Europe into one consolidated, powerful and single approach to achieve the performance that we need in order to support space operations."

Krag also said that even if full compliance with post-mission disposal recommendations could be achieved, active debris removal would still be necessary to stabilize the situation. ESA hopes to launch its e.Deorbit mission in 2023, the first mission to remove a large satellite from LEO.