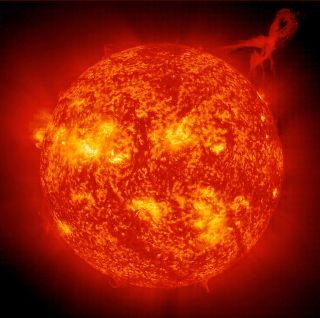 While many studies are focused on the detrimental effects of high energy UV sunlight, it is also an important source of energy that can drive the formation of biomolecules relevant to life.
(Image: © NASA)

High energy, ultraviolet radiation from the sun is a known to hazard to life, yet the energy provided by our star has played an important role as the essential driver of life on Earth.

Before life began, radiation from the sun was the primary source of energy on our planet, just as it is today. In this oxygen-poor, prebiotic world, solar energy may have provided the jolt to transform simple organic molecules into more complex ones, which were used as the building blocks of biology and life.

A new paper by two University of Colorado at Boulder authors considers how this might have happened through a review of existing literature on the topic. [Brewing Life On Earth - Violent Sun, Weak Shielding May Have Contributed (Video)]

"We're looking at examples in the literature and from our own lab where sunlight has been used to build complex molecules from simple, prebiotically-available starting materials," said lead author Rebecca Rapf, a doctoral candidate in physical chemistry.

The paper, "Sunlight as an energetic driver in the synthesis of molecules necessary for life," co-authored by her advisor, Veronica Vaida, recently appeared in the journal Physical Chemistry Chemical Physics. Rapf's work is supported by a NASA Earth and Space Science Fellowship as well as funds from NASA's Habitable Worlds Program.

The lack of oxygen in the early atmosphere means that more high-energy ultraviolet radiation from the sun would have reached the surface of the prebiotic Earth than today, where it is filtered by ozone. Even though this component of sunlight can be destructive to certain biomolecules, the energy provided could still be useful to early life chemistry, Rapf said. “Even if you destroy a molecule, it is broken into smaller, very reactive chunks that readily undergo additional reactions, recombining to form larger high-energy molecules.”

In particular, the researchers were intrigued by a group of oxygen-laden acids called oxoacids. An example is pyruvic acid, which is at the center of key metabolic pathways in life today. When dissolved in water and illuminated with ultraviolet light, pyruvic acid is known to react to make larger molecules, with higher yields under the oxygen-limited conditions that would be found on the early Earth.

Pyruvic acid is only one of a class of molecules that react in the same way to form these larger species. Another molecule in this class, 2-oxooctanoic acid, is particularly interesting because it is an example of a simple lipid. 2-oxooctanoic acid was likely "prebiotically relevant," Rapf added, meaning it could be useful to the chemistry that eventually led to life.

In an earlier study on 2-oxooctanoic acid, Rapf and Vaida found that exposing it to light forms a more complex molecule, dihexyltartaric acid. This is noteworthy because the new molecule has two alkyl chains, meaning it more closely resembles the lipids that are in modern cells, which also have two tails. This light-driven process, discovered in the Vaida lab, is one of only a few ways to make double-tailed lipids from simple, single-tailed molecules under prebiotic conditions.

"We're using sunlight as a way of building bigger molecules, but in order to be useful to the development of biology any molecules you build have to be stable enough to exist in the environment," added Rapf.

In the case of 2-oxooctanoic acid, the product, dihexyltartaric acid, does not absorb the same UV light and therefore, is protected from undergoing further photochemistry (chemical reactions as a result of sunlight). These double-tailed lipids also spontaneously assemble into membrane-enclosed compartments, resembling simple protocells that are necessary to the evolution of life. The researchers are hunting for other molecules that could be activated by starlight and generate biologically-relevant compounds in a broader astrobiological context.