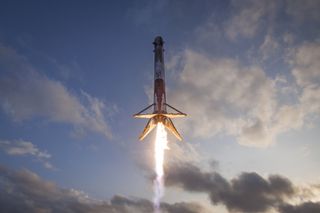 A SpaceX Falcon 9 rocket booster comes in for a drone ship landing on March 30, 2017 after launching the SES-10 communications satellite into space. It was the first time SpaceX ever reused a Falcon 9 booster.
(Image: © SpaceX)

SpaceX President Gwynne Shotwell, speaking at the 33rd Space Symposium here April 5, said the company expects to see greater cost savings on future launches of reused Falcon 9 vehicles as the company reduces the amount of refurbishment work it does on the recovered stages.

Shotwell did not give a specific figure for the cost of refurbishing a Falcon 9 first stage that first flew on an April 2016 launch of a Dragon cargo spacecraft so it could launch the SES-10 communications satellite March 30. "It was substantially less than half" the cost of new first stage, she said.

That cost savings, she said, came even though SpaceX did extensive work to examine and refurbish the stage. "We did way more on this one than we're doing on future ones, of course," she said.

The company's long-term goal for first stage refurbishment is to turn the stage around within 24 hours for another launch. "Looking forward for reusability, we don't believe it really, really counts unless you can turn it around rapidly, or almost as rapidly, as you turn around an aircraft," she said. "Our challenge right now is to refly a rocket within 24 hours. That's when we'll really feel like we've got reusability right."

That rapid and low-cost turnaround is critical as SpaceX seeks to recoup the large investment it has made in reusability. At a press conference after the March 30 SES-10 launch, SpaceX Chief Executive Elon Musk estimated the company had spent at least $1 billion on reusable launch vehicle technologies to date.

"We do have to figure out some way to pay off the development costs of reusability," he said, noting that the company was still working to determine how much of a discount to offer for missions using a "flight-proven" stage. "The price savings can't be as much as the cost savings because we need to repay the massive development costs."

In addition to reusing the first stage, SpaceX is also attempting to recover and, eventually, refly the payload fairing. Musk revealed at the March 30 briefing that the company made its first attempt to recover the two halves of the payload fairing used on the SES-10 mission, recovering at least one of the two sections.

"We are planning on recovering the fairings. They're actually quite expensive," Shotwell said. She confirmed SpaceX recovered one payload fairing section, but was not certain if the company found the other.

"It looked pretty good," she said of the recovered fairing section. "You'll see more fairing recoveries as we go this year."

Musk said at last week's briefing that each payload fairing costs about $6 million. "At one point we were debating if we should try to recover it or not," he said. "Imagine if you had $6 million in cash in a pallet flying through the air, and it was going to smash into the ocean. Would you try to recover that? Yes, yes you would."

Shotwell said she believed an industry skeptical of SpaceX's efforts to reuse Falcon 9 boosters had become convinced it would be useful. She recalled a quote from science fiction author Arthur C. Clarke describing the three stages of reactions to revolutionary ideas. "'It's completely impossible.' We've heard that for 15 years. 'It's possible, but not worth doing.' We're still hearing that a little bit," she said."