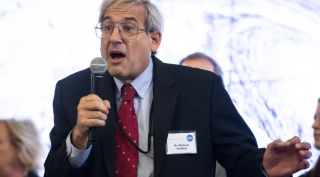 Michael Freilich, director of NASA's Earth science program, said that while the proposed cuts to his budget are significant, they are "not existential."
(Image: © NASA/Aubrey Gemignani)

WASHINGTON — Despite a proposed cut of more than five percent in the administration's fiscal year 2018 budget request, NASA officials argued that its Earth science programs should not face major disruptions.

The budget blueprint, sometimes called the "skinny" budget and released by the White House Office of Management and Budget March 16, proposed providing $1.8 billion for NASA's Earth science division. That is a decrease of more than $120 million from the $1.921 billion it received in fiscal year 2016.

NASA Acting Administrator Robert Lightfoot, speaking at a March 30 meeting of the NASA Advisory Council (NAC) here, acknowledged the cuts, but also attempted to deemphasize the effects of the cuts, which have been widely criticized by scientists.

"Overall, I'd say science funding was stable at the topline, although some missions in development will clearly not go forward in the Earth science arena," he said. "We continue to be committed to study our home planet."

"We'll reshape our focus based on the resources available to us," he added. "The budget, while it's lower, is still in pretty good shape for us for what we're going to do in Earth science."

Michael Freilich, director of NASA's Earth science division, also sought to play down the proposed cuts during a March 28 meeting of the Committee on Earth Sciences and Applications from Space of the National Academies. "The impact is significant, but it is not existential," he said after describing the plans to cancel the four projects.

Freilich said he understood that the bill only included issues for which there was bipartisan agreement in order to speed its passage in the House and Senate. "It's not one of the things I worry about," he said of the lack of Earth science provisions in the act.

Neither Lightfoot nor Freilich had additional details about how the proposed cut in Earth science funding would be implemented beyond the planned cuts in the four projects. Those details will come when the full budget proposal is released. Andrew Hunter, NASA's acting chief financial officer, said at the NAC meeting he did not have a firm date for the full budget release but expected it to come out in mid-May.

Freilich offered some advice at the committee meeting as members sought additional details. "My suggestion is to try and take the qualitative information here" and not try to reverse engineer the budget details based on that limited information, he said. "It's probably not productive."